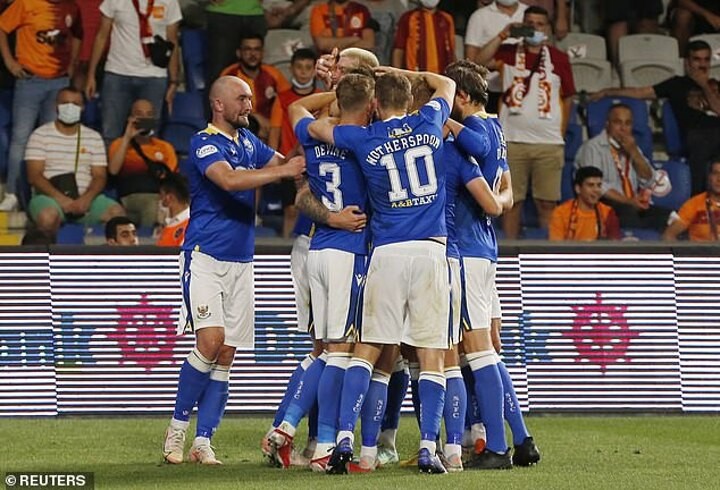 St Johnstone are a team who know how to rise to the big occasion.

Double trophy winners in Scotland last season Callum Davidson's side gave themselves an outstanding chance of claiming a major European scalp on a balmy night in Istanbul. A monumental effort married to an impressive result leaves everything to play for in Perth next week

For three minutes they revelled in some Turkish delight. A spot kick opener from captain Jason Kerr came after 57 minutes when Galatasaray's veteran keeper and captain Fernando Muslera hauled down striker Chris Kane in a moment of madness. Castigated for a howler in a 5-1 Champions League qualifying defeat to PSV, the Uruguayan compounded the felony by earning a red card.

Replacing Ali McCann as spot kick taker after the midfielder – outstanding here – missed against Ross County in Saturday's Premiership opener, Kerr struck his effort into the ground but still found the net.

The regret is that the lead didn't last. Within three minutes Galatasaray's French debutant right back Sacha Boey – heavily linked with Celtic – smashed the ten men level with a rasping low strike from the edge of the area.

The tie finely balanced, the winners of the second leg face Danish side Randers in a Europa League play-off, the losers playing Vojvodina or LASK for a place in the Conference League. For the Scottish Cup holders it's all to play for.

The opening 15 minutes were a nerve-shredding affair, best watched through the cracks of the fingers.

Midfielder Aytac Kara took up residence on the left flank and slung in cross after cross.

Another Kara cross laid into the path of Akturkoglou struck the post minutes later. Mohamed's second bite was saved by Zander Clark and wouldn't have counted due to an offside. Yet already yo feared the worst for Scotland's cup double winners of last season. Kara's deliveries from the left side were causing huge problems and they couldn't get out.

They didn't help themselves with a lack of composure in possession. Their first European foray since season 2017-18 the inexperience was obvious and, on a hot night in Istanbul, draining.

Slowly, piece by piece, St Johnstone grew in confidence. Young Ali McCann had a terrific half, betting himself to make ground over the halfway line. Somebody had to.

St Johnstone's first foray up the pitch after 16 minutes could have brought a goal. Murray Davidson's shot from the edge of area lacked force and bit, but gave the keeper Muslera a save to make. Progress.

A water break halfway through the first half brought hydration, respite and the chance for St Johnstone to catch their breath.

Within four minutes of the restart they carved their best chance of the game.

A piercing confident run from the stand out McCann surged into the attacking third. Feeding David Wotherspoon on the left the attacker cut the ball onto his right foot and you waited for the net to bulge. A slightly feeble shot was gathered comfortably by Muslera, but the game had changed. St Johnstone had stemmed the tide.

The half-time stats showed the Perth side had two shots on target to Galatasaray's one and three changes from Fetih Terim at half-time told their own tale.

The former Atletico Madrid pair of Radamel Falcao and Arda Turan started the night on the bench – the latter replacing former Liverpool winger Ryan Babel. Piece by piece the big guns were wheeled out.

Soon enough Terim would be forced to replace his goalkeeper as well, the veteran captain Muslera making a terrible hash of a short pass-back. A thumping clearance with his feet would have done fine. Instead the ball rilled up off his knee and allowed Chris Kane a chance to nick it, the keeper hauling the striker down. It was a clear penalty and a red card, Saints captain Kerr accepting responsibility and converting. It wasn't the cleanest kick in the world. It really didn't matter.

The moments after a goal and critical and Saints didn't cope well. Young Devine, a loan signing from Manchester United, is inexperienced at this level. It showed when he allowed debutant Boey – a Celtic target for right-back – to surge past him on the edge of the area and smash a terrific strike low into the far corner with Zander Clark beaten.

Stevie May replaced Kane after a night of selfless foraging from the striker in oppressive heat. Galatasaray's calamitous goalkeeping continued when Berk Balaban – aptly named - was robbed by the substitute in the corner, a strike on goal from an acute angle blocked on the line by Brazilian defender Marcao.

When called upon Zander Clark makes big saves. The Saints keeper produced a brilliant stop to keep out a Luyindama textbook downward header from a corner two minutes from time, despite a late nick off Ali McCann. A first leg draw was the very least the visitors deserved after one of the finest European results in the club's history.