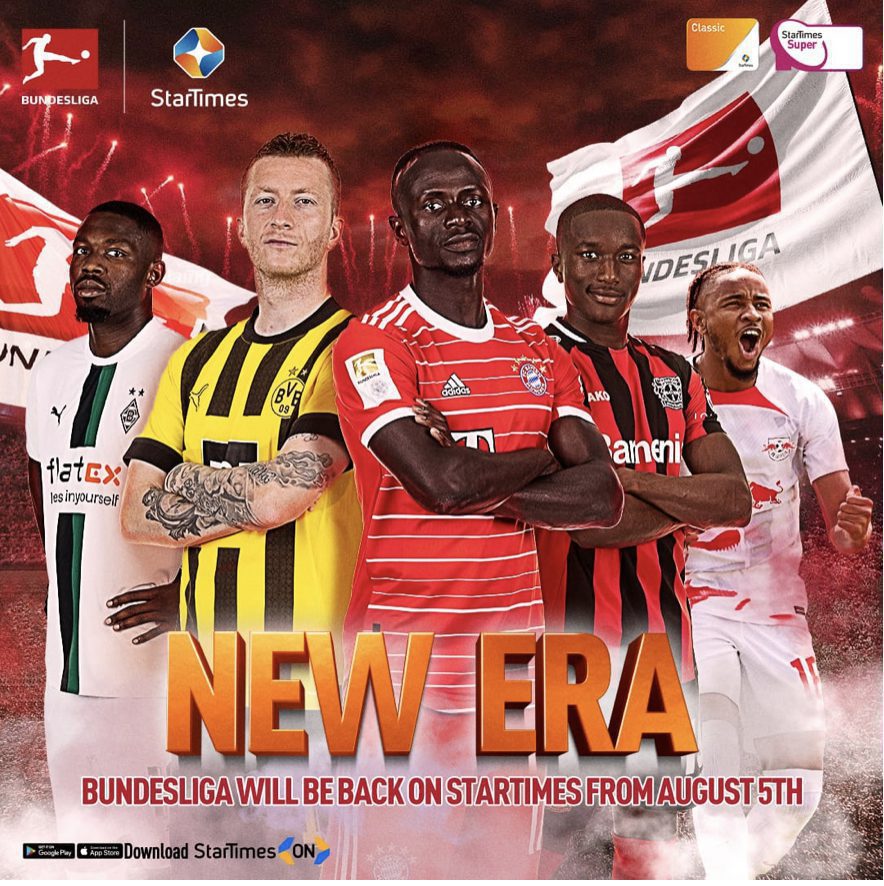 StarTimes, official broadcaster of the German Bundesliga, out-doored the 2022/2023 season in a virtual launch over the weekend in Accra.

The new Bundesliga season which is scheduled to kick-off on Friday, August 5th, 2022, opens with a night game between Eintracht Frankfurt and champions Bayern Munich.

StarTimes, welcomed the new season with a colourful launch during the DFL Super Cup match over the weekend between Bayern Munich and RB Leipzig in a live studio event launch on Max TV Ghana.

The night was graced by former Hoffenheim and Ghanaian striker Prince Tagoe who recalled the fun that comes with playing in the Bundesliga.

“It was always a great feeling playing in the Bundesliga, players are well taken care of. For the fans, it was a merry making weekend for them during match days. After a hectic working week, they gather at the stadium on weekends to have fun while watching the live match with drinks to cheer the players on.”

The Bundesliga rarely disappoints in terms of entertainment and high-scoring contests even though the Bavarians have established a long-term monopoly.

General Manager of StarTimes Ghana, Mrs. Akofa Bansonassured fans of having non-stop access to the most entertaining league in the world.

“Our marriage with the Bundesliga continues, new season, new era. Bundesliga is exclusive to StarTimes and if you want to follow the Bundesliga, you can only do that on StarTimes either on the decoder or the StarTimes ON App. You can link your decoder to the APP on as many as 3 mobile devices to enjoy the Bundesliga on the go.”

“We are excited about the new season and we are going to bring all games of the season to viewers who are yearning to watch the top players including Africa’s best player, Sadio Mane, Ghana’s Daniel Kofi Kyere, Leroy Sane, Matthijs de Ligt, Christopher Nkunku and a host of others.”

All matches will be broadcast on StarTimes’ 5 sport channels, live and in HD, and on the streaming mobile application StarTimes ON, for fans to watch games concurrently on several devices and not miss any minute of the live action.