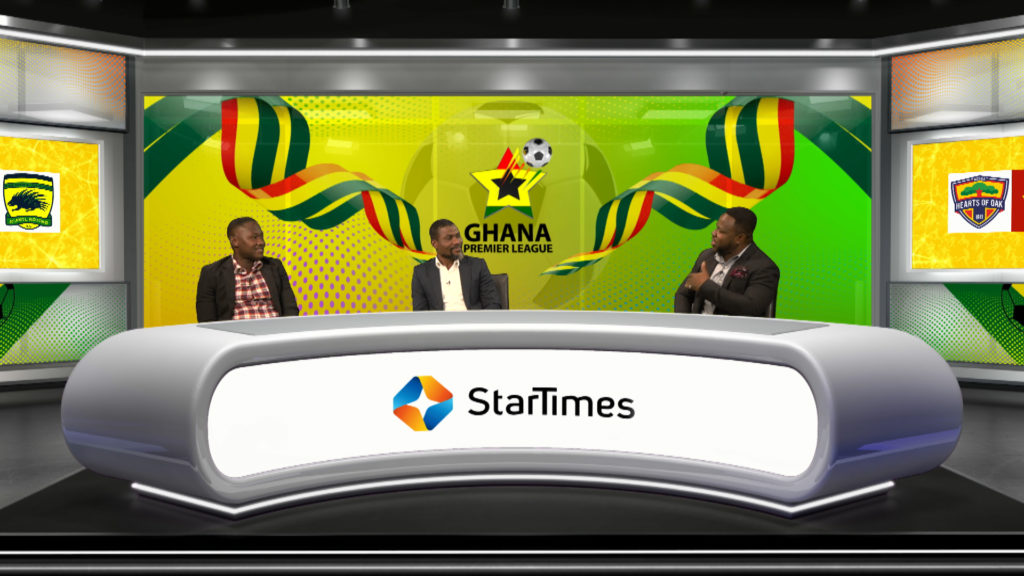 Laryea Kingston and Edwin Bekoe were the studio analysts

Fittingly the Chinese broadcasting giants reserved their best coverage for the biggest match of the football calendar in Ghana when the Phobians hosted the Porcupines Warriors.

With the entire country focused on the match as most of the week's match was played in the previous day, the television company exerted their best effort to project the two biggest rivalries in the country on several fronts not seen in the country before.

For the first time there was hourly live television updates from the stadium to show how the excitement was building for the match on partner TV stations Max TV and Adepa TV.

The country also saw two former players of the sides Laryea Kingston and Eric Bekoe sitting as a studio panelists on the live television ahead of a Super Clash.

There was also a live skype update of former Ghana FA spokesman Ibrahim Sannie Daara on how the match stands in comparison to other big derbies in Africa.

A drone coverage also give a perfect look from the skies as the two buses of the two sides arrived at the stadium. The was also an aerial view of the stadium from the sky just before kick off showing the beautiful outside and inside areas of the stadium.

This is the first time Ghana is getting diverse and modern coverage of a local league match which will help improve the Ghana Premier League demonstrating why StarTimes are the deserved television rights holders of the top-flight competition.

Backed by superior graphics that ensure tri split screens, live data of performance of players and simulcasting of two matches - the first time in the Ghana Premier League - football fans have been left satisfied.

StarTimes is by far the biggest television deal for the Ghana FA which gave them the top-flight league as well as the FA Cup competition for five years for $5.25m.

But the real cost comes in the weekly production of matches which could see StarTimes fork out an additional $5m per season to produce the matches which includes satellites uplink costs, transportation, wages and per diems for staff, hotel bills and more to broadcast a game.

This comes one year after StarTimes terminated their ten-year contract with the Ghana FA just three years into their $17.9m agreement following a standoff with the Normalisation Committee.

In November 2016, StarTimes acquired all media rights of the Ghana Premier League, the Gala, the National Division One League, the MTN FA Cup, the Ghana Women’s League and the Ghana Juvenile League.