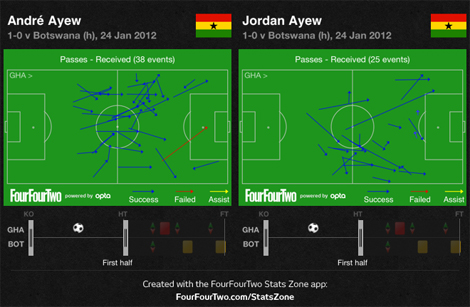 Finalists last time, Ghana got off to a winning start against Botswana â€“ and, notes Tom Legg, look to be adressing their critics

A 25th-minute goal by ''Rock of Gibraltar'' John Mensah secured Ghana a deserved victory over Africa Cup of Nations debutants Botswana on Tuesday afternoon in the Stade de Franceville.

Botswana coach Stanley Tshosane opted for a defensively minded 4-1-4-1, and in the absence of youngster Skhana Koko the goalscoring burden was placed firmly upon the shoulders of talismanic striker Jerome Ramatlhakwane.

There was only one surprise in Ghana's starting XI: the inclusion of Emmanuel Badu over Udinese team-mate Kwadow Asamoah suggested coach Goran Stevanovic was mindful of the physical threat Botswanaâ€™s midfield unit would pose.

Asamoah Gyan was passed fit to play after his recent injury, and Jordan Ayew, younger brother of the BBC African Footballer of the Year Andre Ayew, made his Africa Cup of Nations debut on the right flank.

The Black Stars go from reactive to pro-active

Recent criticism of Ghana has centred around the side's lack of tactical development over the past 12-18 months. No longer underdogs, the 2010 Africa Cup of Nations finalists and World Cup quarter-finalists are now arguably Africa's top side. Despite this change in status, their tactical approach had shown little sign of development, until today.

Ghana dominated the early exchanges with 68% of possession, while playing a progressive and pro-active attacking style of play, far removed from the counter-attacking system so successfully used under previous coach Milovan Rajevac.

In possession, Ghana were extremely positive in committing players into their opponentsâ€™ half: both wingbacks, particularly Samuel Inkoom on the left, were fundamentally wingers. This allowed Jordan Ayew and Andre Ayew to drift infield and combine with Asamoah Gyan and the midfielders, as the brothers' first-half passes-received screens demonstrate.

Advanced wingbacks left space at either side of Ghanaâ€™s centre-backs, Mensah and John Boye. Stevanovic remedied this by encouraging his holding players Anthony Annan and Emmanuel Badu to sit deeper and wider, almost covering for his progressive wingbacks, when either of his two centre backs had the ball at their feet.

The Internazionale midfielder is Ghana's best passer over distance; with time and space just in front of the centre circle, he could drive angled passes out to either flank, utilising the advancing wingbacks. 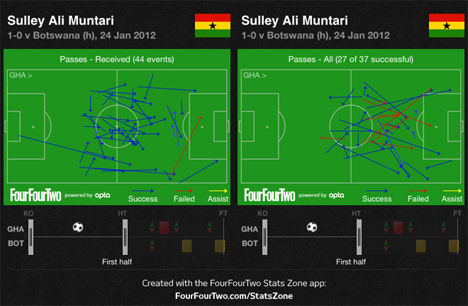 Another positive aspect of Ghanaâ€™s attacking strategy was the interchange of positions between Andre and Jordan Ayew. This gave the Black Starsâ€™ central midfielders better short passing options and, crucially, created space down the flanks for their wingbacks.

Conversely, Ghanaâ€™s attacking strategy influenced their defensive system: with players committed in advanced areas of the pitch, when they lost the ball they had to press Botswana in their own half of the pitch. Ghana wanted to dominate possession and to control the tempo of the game. They wanted to be proactive, not reactive.

The importance of good crossing and attacking options

The most positive aspect of Botswanaâ€™s first half performance was their defensive shape. They were patient, well-organised and defended deep enough to restrict the space beyond their back four, denying Asamoah Gyan space to penetrate.

When a team defends like Botswana did in the first half, and the opposition adopts the type of attacking system Ghana deployed, the best option for the attacking side is to play â€˜aroundâ€™ their opponents. This is done by creating spaces in wide areas, allowing wingers and wing backs to delivery good quality crosses into your opponentsâ€™ penalty area.

Ghana failed to do the latter part of this. Of seventeen crosses in the first half, only three were completed; of 12 after the break, only one reached a Black Star. 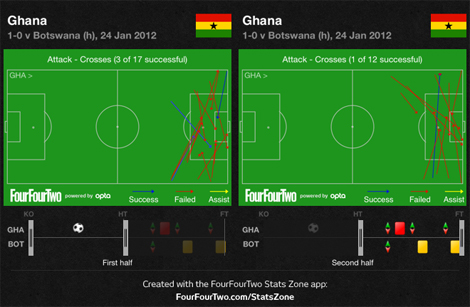 The reason why so many of these crosses were ineffective is not only due to the poor quality of the balls delivered from wide areas, but also the lack of targets the wingers had to aim for: Ghanaâ€™s frontline is possibly the smallest in the Africa Cup of Nations. Thereâ€™s simply not a lot to aim for.

If Ghana are to continue with this attacking system â€“ and it's to be hoped that they do â€“ then they need to work on have a more varied repertoire of crosses from wide areas, like cut-back crosses to the edge of the area. Players like Muntari and Andre Ayew are more than capable of finishing from distance.

A way forward for Botswana

Nato is Botswana's midfield pivot and best long-distance passer. As soon as Botswana win the ball back in deep areas, they try to get Nato in possession as quickly as possible. And once Nato is on the ball, Mongala looks to make runs beyond the advanced opposition wingback, knowing that Nato will more often that not find him with a long diagonal pass.

The final phase relies on the ability of Mongala to either beat a covering defender and/or deliver a quality cross for Ramatlhakwane to meet. And that's where the Zebras' plan fell down: although Mongala completed 30 of 33 attempted passes, most were well outside the danger area and he failed to complete his sole take-on or any of his four attempted crosses. 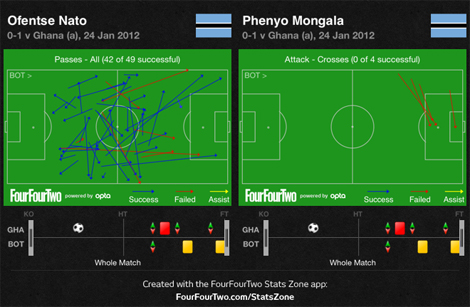 Tuesday night's clash between Mali and Guinea, which ended 1-0 to the Malians, was one of the most open and entertaining games thus far and highlights the quality of Group D. But you could argue that this gives Botswana a better opportunity to advance out of the group stage than if they were in a so-called â€˜easierâ€™ group against nations like themselves who will defend deep.

Like Ghana, Mali and Guinea have full-backs who like to push on and support in attack. If Natoâ€™s aim stays true during the remaining two group games, there should be opportunities for him to unleash more diagonals for Mongala and Moemedi Moatlhaping to latch onto. If they can deliver with quality from wide areas, then Ramatlhakwane should have the goalscoring opportunities on which he thrives.