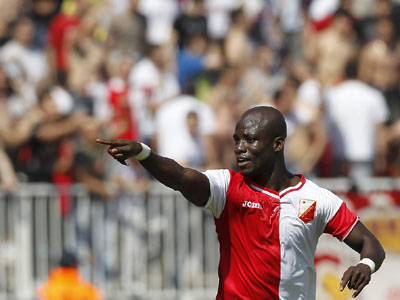 Stephen Appiahâ€™s thunderous strike for Vojvodina against Red Star has been voted the clubâ€™s best goal in the just ended campaign.

The ex Ghana captain who has seen a massive improvement in his form since moving to Serbia in January, scored from 20-yards out with a belter struck from the right foot from the edge of the area.

Appiahâ€™s goal drew his side level after Red Stars had taken the lead in the game played in Novi Sad.

Oumaru scored the winner for Vojvodina in the final game of the season which sees them finish third and a place in next seaonâ€™s Uefa Europa League.

Appiahâ€™s goal in particular drew a lot of praise and now as it has emerged, been adjudged the best club goal which has gotten the club determined to secure the 31-year-oldâ€™s service on a permanent deal.

â€œThe President (of Vovojdina) called me three days ago and asked me when I will be coming back,â€ Appiah revealed.

â€œHe told me how much they were happy with my performance and that my goal against Red Star was voted the clubâ€™s best goal.

â€œBut I told him they will see me soon after I make a decision.â€

Watch Appiah's stunning goal in the video below: