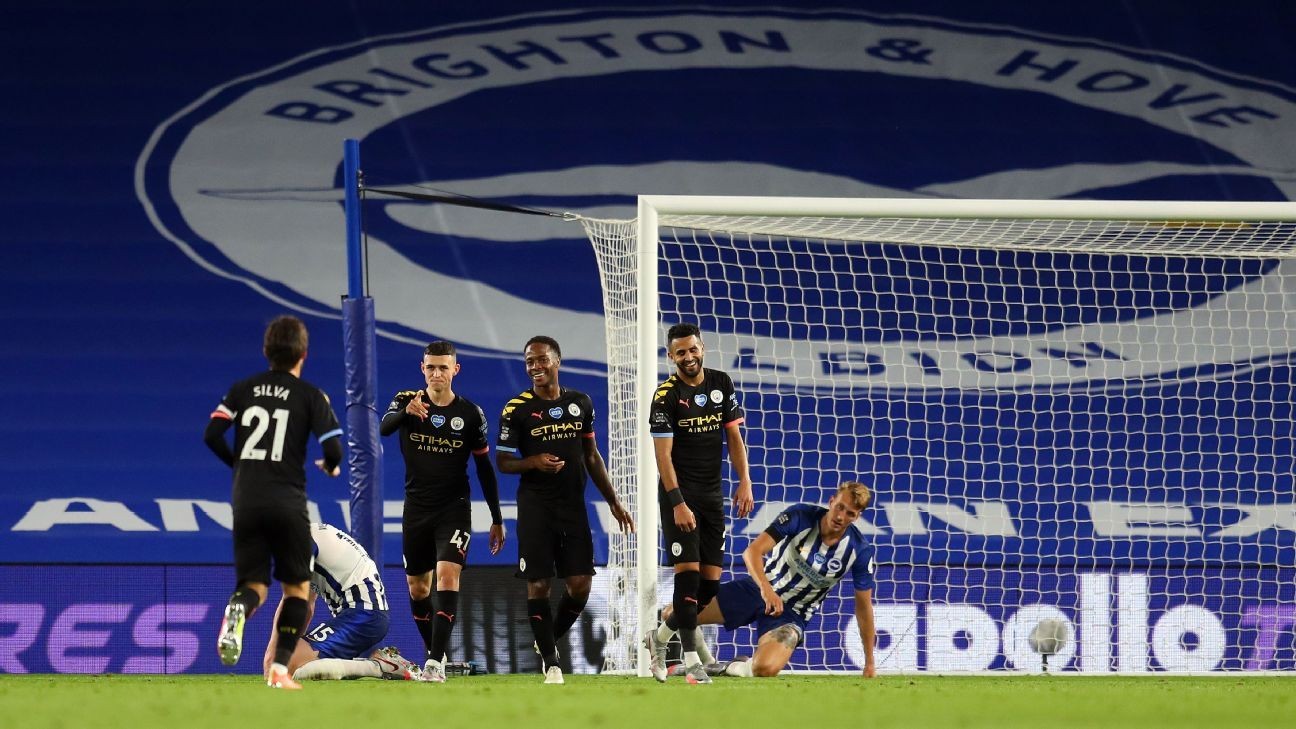 Raheem Sterling scored a hat trick as Manchester City thrashed Brighton 5-0 at the Amex Stadium. Sterling put City ahead on 21 minutes before adding two more after the break -- both headers -- to take his season tally 27. Gabriel Jesus and Bernardo Silva were also on target. The result, City's third 5-0 win since the restart, means Pep Guardiola's team are guaranteed a place in the Champions League next season -- provided they win their Court of Arbitration for Sport appeal over UEFA's two-year ban. A decision is expected on Monday, July 13.

It's good news for Guardiola that Sterling has rediscovered his scoring touch since the restart. The England winger went 12 games without a goal before the break but since the resumption, he's got seven in seven games. Sergio Aguero will be a big miss for key games against Arsenal in the FA Cup and Real Madrid in the Champions League, but Guardiola can be satisfied that Sterling is once again a major goal threat.

Very little has gone wrong when you win 5-0 away from home in the Premier League, but Kevin De Bruyne might be wondering how he didn't add another assist to his tally as he chases Thierry Henry's single season record of 20. De Bruyne is still on 18 despite his delivery into the penalty area being near faultless once again.

7 -- The City boss continued his habit of heavily rotating his team. After making five changes for the victory over Newcastle, he made six at the Amex Stadium, including an entirely new back four. No Premier League manager makes more changes than Guardiola but it never seems to affect their rhythm. Expect more of the same when Bournemouth visit the Etihad Stadium on Wednesday.

GK Ederson, 7 -- Had nothing of note to do as Brighton failed to muster a shot on target.

DF Kyle Walker, 8 -- Gave Brighton a lot of problems with his raiding runs down the right. Played very well.

DF Benjamin Mendy, 7 -- Made City's first chance with a cross from the left which found Gabriel Jesus. Went close to scoring twice.

DF Aymeric Laporte, 7 -- Positive for the Frenchman to get 90 minutes ahead of crucial games against Arsenal and Real Madrid.

DF Eric Garcia, 7 -- Missed a glorious chance to score from a corner on 15 minutes. Took up good positions and repaid Guardiola's faith again.

Raheem Sterling was spectacular for Manchester City as they pummeled Brighton in the Premier League. CATHERINE IVILL/POOL/AFP via Getty Images

MF Kevin De Bruyne, 7 -- Passed fit despite taking a heavy challenge at the end of the victory over Newcastle. Hit the post with a fabulous free kick in the second half.

MF Bernardo Silva, 7 -- Not had his best season but a first Premier League goal since November should boost his confidence.

FW Riyad Mahrez, 7 -- Intelligent pass whipped into Jesus in the build up to the first goal. Crossed with his left foot too.

FW Raheem Sterling, 9 -- Two touches out of his feet and a drilled finish into the far corner to give City the lead before getting two in the second half with two rare headers.