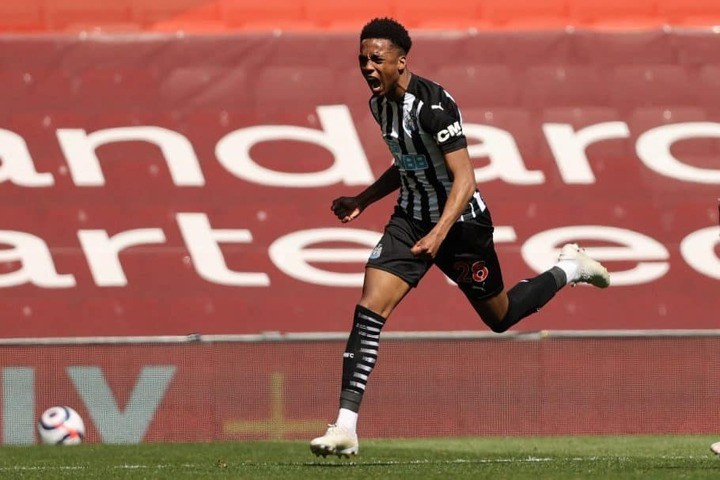 Newcastle United manager Steve Bruce has, on Saturday, spoken out over the Magpies’ hopes of luring Arsenal midfielder Joe Willock back to the club this summer.

21-year-old Willock was of course one of a host of Gunners stars to depart the Emirates during the January window.

After the likes of Mesut Ozil, Sokratis Papastathopoulos, Sead Kolasinac and William Saliba (the latter two on loan) moved on, Willock followed both Ainsley Maitland-Niles and Shkodran Mustafi out the exit door during a hectic deadline day in North London.

This came with Mikel Arteta continuing his ongoing efforts to trim Arsenal’s bloated squad back to a reasonable size.

Willock majorly struggled for consistent game-time over the opening half of the campaign, en route to just a pair of Premier League starts.

To say that the English youth international subsequently enjoyed an upturn in fortunes at St. James’ Park, though, would be putting it lightly.

Willock went on to play an absolutely starring role in Steve Bruce’s ranks in the middle of the park over the 2nd half of the campaign, lighting up Tyneside courtesy of an impressive combination of drive, intelligence and, above all, nose for goal.

Remarkably, all told, the midfield talent racked up 8 goals across 14 Premier League appearances for Newcastle (11 starts). Making this tally even more impressive is the fact that seven came across the Magpies’ last seven outings of the season, including winners versus the likes of West Ham and Sheffield United.

In turn, it has since come as little surprise to see speculation spread that those in a position of power at St. James’ Park have set their sights on a permanent deal for Willock.

But, if the latest update on the situation provided by none other than Steve Bruce himself is anything to go by, then Newcastle, as of yet, have not given up hope.

Speaking on the back of his side’s pre-season friendly meeting with Doncaster Rovers this afternoon, Bruce was drawn on the subject of a potential return for Willock over the weeks ahead.

And the tactician refused to rule out the possibility, explaining:

‘You have to ask Arsenal, it is their decision and the player’s decision.’

‘Of course we want him back, he did great with us and gives us another dimension in midfield that we have not got.’

‘We will keep bashing away at it.’