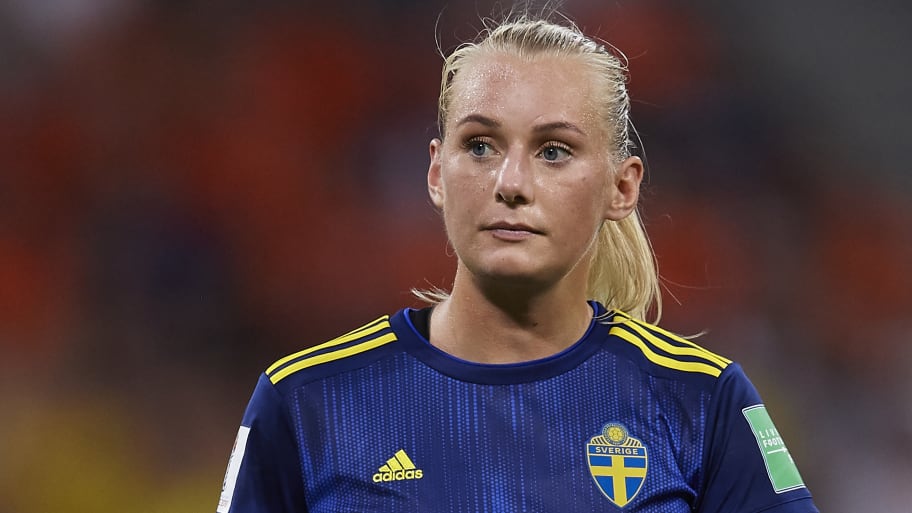 Arsenal are expected to secure the signing of Sweden forward Stina Blackstenius in the coming days, beating WSL rivals Manchester United to the star’s signature.

Blackstenius has established a reputation as one of Europe’s top strikers in recent years and has been the most talked about player of the January transfer window.

United, having first shown interest during the summer, were initially thought to be close to a deal. But the Red Devils, who have struggled to recruit since the end of last season, seemed to lose their edge in the race once Arsenal registered serious interest.

Blackstenius’ contract with Swedish club BK Hacken, for whom she played in the Champions League group stage earlier this season, expired at the end of December. Even though a move to the WSL was the more likely option, a new deal with Hacken hadn’t officially been ruled out until now.

The club confirmed on Thursday afternoon that Blackstenius has decided not to renew her contract and will ‘continue her career abroad’. The player had also previously stated her interest in testing herself in England, where she believes the style is a good match for her attributes.

In addition to interest from United, the 25-year-old had also been tracked by Tottenham and even Chelsea. But Swedish newspaper Goteborgs-Posten (GP) expects Arsenal to get a deal over the line – the Gunners were also recently labelled new ‘favourites’ by BBC Sport, overtaking United.

Blackstenius herself confirmed to GP on Thursday that her future will be known ‘in the next few days’. She additionally confirmed what Hacken said about her leaving Swedish football.

For Arsenal, the arrival of a proven elite level goalscorer is a timely boost. Following a blistering start to the season, the Gunners have been out of sorts since November and have slumped into an alarming streak of four defeats in their last five games in all competitions.

They will need a short-term boost if they are to fight for silverware on multiple fronts this season, with a quadruple – WSL, Champions League, FA Cup and Continental Cup – still available to them, as they face stiff competition in the fight for each trophy.

Longer-term, recent reports hint that they may need a replacement for superstar striker Vivianne Miedema. The Dutch international is out of contract at the end of the season, but while she hasn’t ruled out signing a new deal, she has also been very open about wanting to play for a club that can match her ambition of winning the Champions League. Barcelona and PSG are linked.

As for United, manager Marc Skinner faced the media on Thursday and disappointed supporters with an admission that the club is not currently close to getting any deals over the line.

“We don’t have anyone as of right now but we’ve been working hard. It’s about getting the right people in to fight this group. As of the next couple of days, no. We’re always hopeful we can potentially do some work if the right people come about,” Skinner said.

The United boss had previously spoken optimistically about being ‘active’ in the January market, potentially with a view to tapping into the American market. One such name is Houston Dash and England player Rachel Daly, who is believed to have been training with United during the winter.

This article was originally published on 90min as Stina Blackstenius confirms she is leaving Sweden ahead of expected Arsenal transfer.