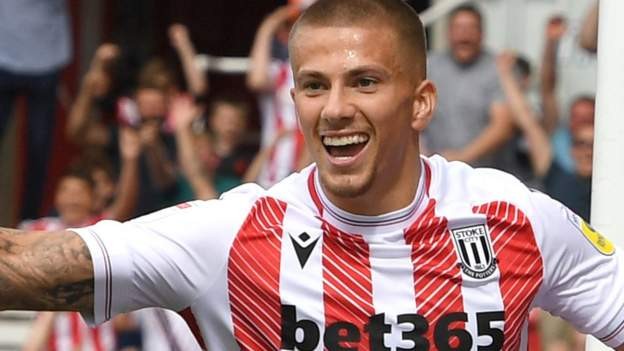 Harry Clarke joined on loan from Arsenal in the summer

Stoke City earned their first three points of the season with Harry Clarke and Jacob Brown giving them a deserved Championship victory over Blackpool.

Defender Clarke, on loan from Arsenal, nodded Josh Tymon's far-post cross past Daniel Grimshaw to give the Potters a first-half lead.

The Seasiders improved in the second half, with Josh Bowler going close to equalising shortly after the restart.

Stoke missed several chances to double their lead before Brown grabbed their second at the near post with 15 minutes remaining.

Dwight Gayle, who joined from Newcastle last month, registered the first effort on goal for the hosts after 13 minutes but Grimshaw was equal to the striker's shot.

Blackpool had to weather plenty of early pressure before Gary Madine sent a glancing header wide and that was the forward's final action in the game as he pulled up with an injury and was replaced by Theo Corbeanu.

Stoke's Josh Laurent then rattled the bar with a fierce effort before the Tangerines went close at the other end when Jerry Yates marginally failed to get on the end of Sonny Carey's ball across goal.

Michael O'Neill's side went ahead when Clarke headed in Tymon's deep cross from close-range to score the Potters' first goal of the season.

The visitors started the second half much-improved and their most dangerous player Bowler fired narrowly wide after a driving run into the box.

Bowler was causing problems for the Stoke defence and was clipped on the edge of the penalty area on the hour mark but Blackpool failed to take advantage of the promising attacking position as Lewis Fiorini's free-kick was headed away.

Stoke twice went close to doubling their lead in quick succession when Aden Flint placed a header over the bar from Tymon's free-kick, before Grimshaw made a fine reaction save to deny Gayle a first goal for his new club.

However, the second goal only seemed like a matter a time and it duly arrived as another dangerous Tymon cross was swept home by Brown.

Josh Laurent (Stoke City) is shown the yellow card for a bad foul.

Josh Bowler (Blackpool) wins a free kick in the attacking half.

Callum Connolly (Blackpool) is shown the yellow card for a bad foul.

Attempt blocked. Rhys Williams (Blackpool) header from the centre of the box is blocked. Assisted by Charlie Patino with a cross.

Attempt missed. Jacob Brown (Stoke City) right footed shot from outside the box is close, but misses to the left.

Kenneth Dougall (Blackpool) is shown the yellow card for a bad foul.

Dwight Gayle (Stoke City) wins a free kick in the defensive half.