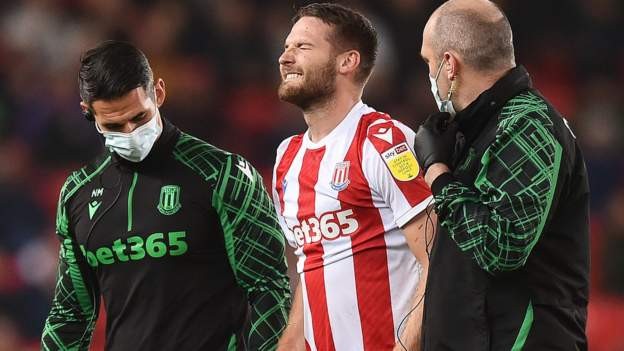 Stoke City midfielder Nick Powell will be out for up to eight weeks with a cracked fibula bone in his right leg.

The 27-year-old limped off in the first half of Stoke's 1-0 home defeat by Bournemouth on Tuesday.

Ex-Manchester United and Wigan player Powell is the Potters' top scorer with six goals in all competitions.

"He's been very strong since he came back but that's the nature of it. It's unfortunate but we have to cope with it," said Stoke boss Michael O'Neill.

The Potters are seventh in the Championship table after losing their past two games.

Being without Nick Powell for up to two months will be a big test for Stoke.

We saw how the team struggled to progress with the loss of key players last season, so will Michael O'Neill's team be in a better place now to cope with Powell's absence?

Not only does he create chances but he is also the team's top scorer this season, but Stoke do have a couple of positives while he's recovering.

Striker Tyrese Campbell is back in contention after a 10-month injury lay-off and Brighton loanee Abdallah Sima is getting closer to returning from injury.

However, for a club that is mounting a promotion push back to the Premier League, losing a key player like Powell is undoubtedly a big blow.