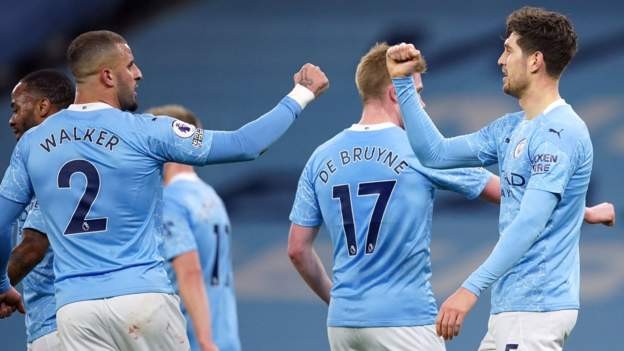 Stones opened the scoring with a header from Kevin de Bruyne's delightful cross as the Belgian made it 100 assists in all competitions since joining the club in 2015.

The hosts were already in complete control when Ilkay Gundogan added a superb second from the edge of the box shortly after the break.

Stones, having previously never scored in the Premier League for City, then smashed in his second from a corner before Raheem Sterling curled in a free-kick for City's fourth.

Guardiola's side can go top if they win their game in hand, while defeat means Crystal Palace remain 13th.

After this victory, Guardiola can celebrate his 50th birthday on Monday knowing his side's title ambitions rest in their own hands.

The Catalan hits that milestone as already one of the most decorated coaches in the modern era, with two Champions League triumphs complemented by eight league titles across three countries, but a third Premier League success looked a far cry when Manchester City sat 13th after a 2-0 defeat at Tottenham in November.

Guardiola's side are undefeated in nine league games since and have now won five in a row to accelerate within touching distance of the summit with a game in hand.

This was a performance that showcased the best City have to offer at both ends.

Former Barcelona and Bayern Munich boss Guardiola is not renowned for his defensive rigidity but his City outfit have conceded the fewest goals in the English top flight this season and this was their seventh clean sheet in the past nine games.

They had the brilliance of De Bruyne to thank for unpicking a Palace side that had set up to frustrate the hosts in the first half.

The 29-year-old's wonderful assist, a perfectly weighted outside-of-the-boot cross, found a rising Stones for the defender to head beyond goalkeeper Vicente Guaita.

That was Stones' first Premier League goal since scoring for Everton in April 2015, and the England centre-back did not have to wait long for another as he pounced on a loose ball after the visitors failed to clear a corner in the second half.

It came after Gundogan curled in his fourth goal in the past six league games, while Sterling got in on the act late on with an excellent free-kick from the edge of the box.

Phil Foden (Manchester City) wins a free kick in the attacking half.

Ferran Torres (Manchester City) wins a free kick in the attacking half.

Eberechi Eze (Crystal Palace) wins a free kick in the defensive half.