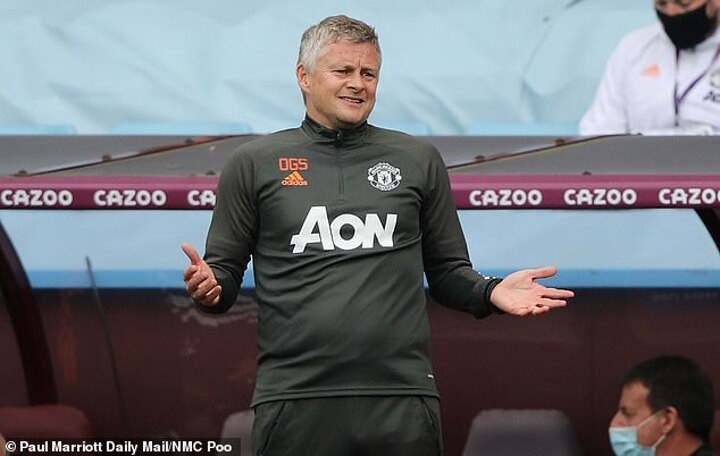 Ole Gunnar Solskjaer does not owe David Moyes and West Ham anything. Or Jurgen Klopp and Liverpool.

So if Tuesday night he wishes to play 11 reserves, that's his prerogative. He has done his job for Manchester United. And if others have not done theirs, that's not his fault.

West Ham have had a fine season but have lost three of their last four games, including two at home. Liverpool lost six out of seven league matches between February 3 and March 7, winning only at Sheffield United.

With different results from the clubs around them, United might have been compelled to look at this week differently.

Instead, with West Ham's defeat by Everton on Sunday, United were guaranteed Champions League football. And until UEFA seed teams according to league position rather than coefficient worth, there is little difference between second and fourth.

So if Solskjaer chooses not to risk his most influential players against Leicester on Tuesday night, he has earned that right. Klopp and Moyes spoke of the integrity of the league and how it has not been served by United's schedule, but what were the alternatives?

'United have three games in five days then a weekend off?' marvelled Klopp. 'So it looks like there was a window where we could have done something different.'

Not really. United's weekend off coincides with Liverpool vs West Bromwich Albion on Sunday and Leicester's FA Cup final on Saturday. Aston Villa play Crystal Palace on Sunday, too.

So with none of United's three opponents free, what difference does inactivity make? United asked West Bromwich to move their fixture with Liverpool to allow wider rescheduling. West Bromwich refused.

The Big Six clubs don't have much credit with the rest of the league right now. United and Liverpool were ready to consign 14 clubs, and the rest below, to the wilderness. It is a bit early to start asking for favours.

Equally, what is best? An XI of United players exhausted from a trip to Rome and a match at Aston Villa, or a part-second XI of players with a point to prove, relatively fresh? Manchester United could field an entire team who did not start in their last game and still have eight internationals, 313 caps and a World Cup winner on the field.

And that isn't going to happen. There will be some first choices who Solskjaer believes are strong enough to start, others who could come on, if things aren't going to plan.

'When we were coming back from the shutdown, a lot was made of integrity,' said Moyes. 'I don't know if there was a better way to sort the fixtures out, but the Premier League should be answering those questions.'

They have. There wasn't. But as always in football, destiny is in your hands. Add those nine points to West Ham's total this season and consider how threatened they would feel by Manchester United's team sheet.

One aspect of Sergio Aguero's misjudged Panenka penalty that has been overlooked is the excellent save by Chelsea goalkeeper Edouard Mendy. He didn't just stand still and pat the ball down. He was already committed, beginning a dive to his right, when he spotted Aguero's intentions.

He had to get up and stand tall to make what then looked an incredibly easy stop.

It wasn't. It required excellent awareness and reaction speed for such a big man. Mendy looks better by the game.

So many spokes in GB wheels

Dame Sarah Storey, Britain's most successful female Paralympian, received a retrospective therapeutic use exemption at the 2012 London Olympics, after giving a urine sample with high levels of a performance-enhancing substance salbutamol, commonly used to treat asthma.

It was administered after a gold medal-winning 3km cycling race on August 30.

The TUE - which permits athletes to use substances on the WADA banned list - was not applied for until September 7, by which time she had collected three more cycling golds. TUEs are not rare in sport, but are usually received before a race.

It's just that British success does seem to require a lot of plausible explanation these days. And that is never a good look.

Spurs would be made to hand anonymous Bale a new deal

Much giddiness at Tottenham after the 4-0 win over one of the poorest top-division teams of all time last week. Sheffield United remain on course to be the first side not to complete a two-game unbeaten run in a season since Doncaster Rovers in Division Two in 1904-05.

This was largely overlooked in the rush to acclaim Ryan Mason for setting Tottenham free after the dour Jose Mourinho era. It doesn't take much for the hype machine to fire up and Jonathan Barnett was quick to make claims for Gareth Bale, his most lucrative client, who moved swiftly against Sheffield United to bayonet the wounded with three goals.

'He had a tough ride and that shouldn't have been necessary,' Barnett said. 'He came as one of the best players in the world. Sure, he had a few injuries and fitness problems, but once they were over, all he needed was to be played in the right position and consistently.'

Fast forward to Elland Road on Saturday, when Bale, presumably once again in his right position, was largely anonymous and Tottenham went down 3-1.

Tottenham have the chance to extend his loan and continue paying around £240,000 a week of his salary next season. They would be mad to do so. Bale let the plan slip when he talked of prioritising being fit for the European Championship this summer.

If that's his motivation, what is in it for him next year? Sadly, despite the expectation and excitement around his return, the only reputation that has been enhanced during Bale's time at Spurs is that of Real coach Zinedine Zidane. It turns out he was right.

Remarkable, isn't it, that with their best players back Newcastle have been distanced from the threat of relegation?

They have now lost one match in six, in a run many felt was sure to see them relegated - including fixtures against Tottenham, West Ham, Arsenal, Leicester and Liverpool.

Steve Bruce is 11 games short of 1,000 as a manager and captained a greater Manchester United team than any Newcastle have produced in more than a century.

The idea he did not know football, or a player, was always ludicrous. It flatters egos to have a manager like Rafa Benitez on Tyneside, because he comes with a pedigree of Champions League and LaLiga success which it is thought befits a club of Newcastle's size.

Bruce's career, spent bouncing between Birmingham and Hull, Sunderland and Wigan, sometimes up, sometimes down, does not have the same cache. But no one lasts this long in football unless those inside the game recognise a job well done.

Newcastle have had some terrible luck this season with injuries and illness, but Bruce has resisted the brickbats and steered them through.

Mike Ashley stuck by him, too. They deserve to stay up.

Juventus may save UEFA the job of banning them from the Champions League next season. As things stand, they lie fifth in Serie A with three games remaining.

And it's tight, three points separating four clubs up to Atalanta, in second.

Yet this reveals the dark heart of the Super League. Not that mealy-mouthed claptrap about saving football's eco-system, about ensuring the survival of the world's most popular sport, about sustainability, about women's football, about honouring history and generational trends.

What Juventus and the very rich want is the freedom to be useless. To not even be in the top four teams in Italy, yet still skim the cream from Europe's top. It wasn't so long ago that Andrea Agnelli, Juve's president, questioned the right of Atalanta to be in the Champions League. Now he sweats on getting within touching distance of them.

That's meritocracy. It's the heart and soul of the game; and the waking nightmare of the falsely entitled.

Wycombe are winners… just not on the pitch

Wycombe only got into the Championship via a random calculation called points per game. When last season's League One campaign was frozen by the pandemic, it was decided a club's points would be divided by matches played and extrapolated over a completed season. Tranmere went down that way. Wycombe leapt from eighth to third and made the play-offs, which they won.

They have remained steadfastly in the Championship's bottom three since and went down. Now there is talk they could stay up, after Derby lost their appeal against EFL sanctions for breaches of Financial Fair Play rules.

Rob Couhig, Wycombe's chairman, may push for any punishment to be applied this season. If that is a points deduction of two or more, Wycombe would survive and Derby would drop. 'I don't know that the season is over,' Couhig said. 'I don't know whether we're ready to go to lawyers yet, but the message is: watch this space.'

So Wycombe were promoted via Rick Parry's office, and might stay up in a court of law. Just as well fans weren't admitted this season if what happened on the pitch was the least of it.

We’ve heard a lot of commentators speaking up for the fans since the Super League proposals broke, and their words are no doubt sincere. However, the last time Manchester United kicked off at 3pm on Saturday away from home in the Premier League was January 20, 2018, against Burnley at Turf Moor.

Even those who respect the enormous revenue TV brings to football might think three years and four months a long time to be without the most traditional and revered kick-off time and that will not sit well with the fans. One wonders, however, how many of their new allies want to go in front of the camera and talk about it.

Keep hanging around barbers and eventually you're going to get a haircut, and the same is true of Sam Allardyce and relegation-threatened clubs. West Bromwich Albion were a bad team too far, devoid of personality, class and presence, beside Matheus Pereira. Slaven Bilic pointed out these shortcomings to the ownership before the season even started. He wasn't around to take them down, but he was right.

it's not safe to bring ipl to uae

United Arab Emirates is being advanced as the host nation for what remains of the IPL and then the Twenty20 World Cup, with India in such turmoil. Yet UAE's vaccination programme, using the Sinopharm jab from China, is inefficient. More than half the adults in UAE have had two vaccines, yet cases remain higher than they were last year. The World Health Organisation say the Sinopharm jab is 78 per cent effective at stopping symptoms but other countries relying on it, including Chile and Brazil, are concerned that infection rates have remained high. Given the evidence it would be more logical for the IPL to be played here, after the India Test series, giving the UAE time to bring local conditions under control. Yet any suggestion that the success of the UK vaccination problem is put to positive use is dismissed as arrogance. Wrong. Arrogance would be to fly everyone to a location where Covid is not under the same level of control and take a chance it all works out.

IOC president Thomas Bach was due to attend a torch relay event in Hiroshima. Now he will not visit Japan until June at the earliest due to current emergency covid restrictions - with the Tokyo Games due to start a month later. Alarm bells should be ringing loudly now over this reckless and unnecessary gathering of humanity from across the world. Every week comes a signal that it should not be taking place; every week that signal is ignored. Even in Japan, 60 per cent of the latest poll want the Games cancelled. Who is this Olympics actually for? We all know the answer to that. He can't get there this month, but by the time he does it will be too late.