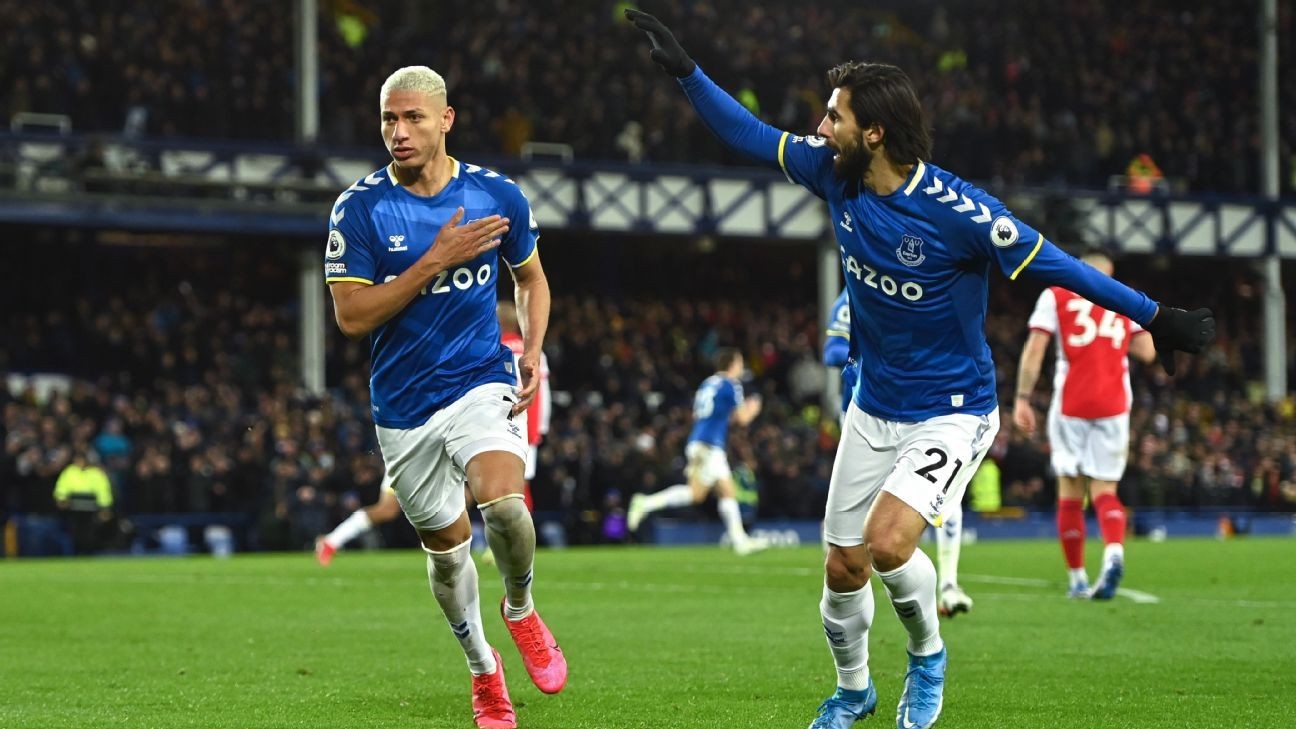 Everton eased some of the pressure on manager Rafa Benitez as they ground out a comeback 2-1 home win over Arsenal in the Premier League on Monday as Demarai Gray struck a stunning stoppage-time winner after setting up the equaliser.

Brazilian forward Richarlison, who had two goals scrapped for marginal offsides after VAR checks, levelled in the 79th minute after Gray hit the crossbar, cancelling out Martin Odegaard's first-half opener for the visitors.

The outcome left Arsenal seventh on 23 points from 15 games while Everton, who announced on Sunday that director of football Marcel Brands had left his position, rose to 12th on 18 points.

Everton captain Seamus Coleman praised the home fans who lifted the Toffees in the face of adversity after they fell behind, having also singled out Gray's fine performance.

"We knew whatever goes on behind the scenes, the fans always come here to support us," Coleman told Sky Sports. "They got behind us from minute one to minute 90 and got us over the line.

"I tell him (Gray) every day. Sometimes these players don't realise how good they can be. He has bundles of ability. He needs to work hard every day as that is what the top players do. He has done that this week."

Everton dominated the first half and created several half-chances before Richarlison headed in a 44th-minute free kick from Andros Townsend, only for his effort to be chalked off.

Norwegian Odegaard then scored on the stroke of halftime from Arsenal's first purposeful move, steering the ball superbly past goalkeeper Jordan Pickford as he got on the end of Kieran Tierney's cross from the left.

Richarlison thought he had equalised in the 57th minute when he drove the ball inside the near post from close range, but Everton were again denied by VAR leaving the Brazilian shaking his head in disbelief.

But it was third time lucky for Richarlison as he beat Arsenal keeper Aaron Ramsdale with a looping header from a rebound after Gray's long-range shot cannoned off the woodwork, setting up a frantic climax.

With a share of the spoils looming, Gray sent the home fans into raptures when he cut inside two players and beat Ramsdale with a thunderbolt from 25 metres which went in off the post, giving Everton their first league win in nine games.