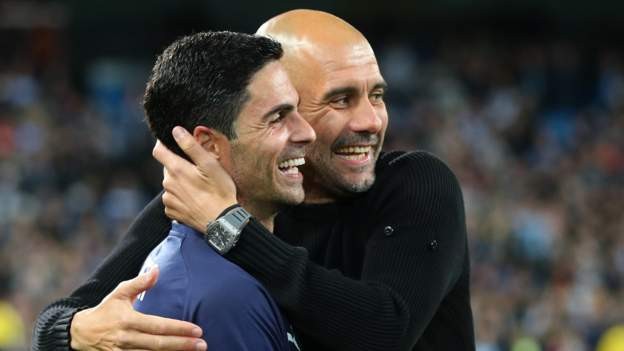 Arsenal boss Mikel Arteta says he would "prefer" not to be competing with Pep Guardiola for the Premier League title.

The two Spaniards started their playing career together at Barcelona when they were youngsters and Arteta left his role as Guardiola's assistant at Manchester City to become Arsenal manager in 2019.

The Gunners currently top the table, five points above defending champions City with a game in hand.

"It's a strange feeling," said Arteta.

"I want the best for him, genuinely, and when you are challenging with someone like this, something comes in between that," he added.

Despite having to go up against his friend, Arteta has relished how Arsenal were competing with City for trophies.

"I always hoped that was going to be the case one day and it's happening this season," said the former Gunners midfielder, 40.

"We're both willing to win and defend our clubs in any way and that's always been the case since day one.

"I would prefer to do it with someone else to be fair."

Arsenal visit City in the FA Cup fourth round on Friday - the first of three matches between the sides this season, with their Premier League encounters set for 15 February and 26 April.

Arteta led the Gunners to a record 14th FA Cup success in his first season in charge in 2019-20.

And he said the tie at the Etihad could be a defining match for both clubs this season.

"It is a competition that is very important to us, very attached to our club and history and will define a moment that is for sure," added Arteta.

Arteta said they could still sign a midfielder this month too, with Mohamed Elneny ruled out indefinitely because of a knee injury.

"We need some more cover in midfield ideally if we can," he added. "In this market it's pretty complicated to do that.

"The most important thing is that we get the performances and the time on the pitch that we need, with the players we have available that are already really good."