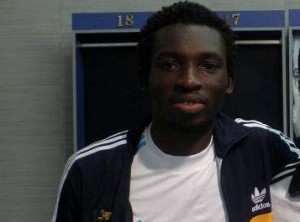 Egypt-based striker Samuel Afum is counting on his experience to help the Ghana's Under-23 to make a bright start in their 2012 Olympic Games qualifier.

The Smouha SC attacker is the only foreign-based player in the squad after teenager Bright Addae on loan at Spanish third division outfit Terrassa was ruled out due to travelling complications.

The Egyptian League is currently on a break due to the political upheaval and Afum is keen to make the best out of the opportunity.

"This is one chance that I want to take advantage off to prove that I'm a good player. Such chances hardly come by so if you get it, you make sure you donâ€™t fluff it," Afum told GHANAsoccernet.com

"I want to bring my experience garnered from the Egyptian League to bear on the team. Itâ€™s important we get enough goals in the first leg to make the second a mere formality."

The Black Meteors, bronze medalists at the Barcelona 1992 Olympics, missed out on the last edition in Beijing.

The team will travel to Khartoum in a fortnight.