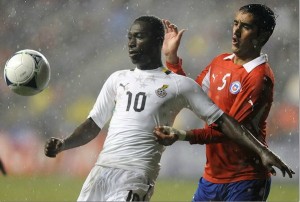 New Edubiase red hot Emmanuel Baffour has expressed his delight after scoring against two of the biggest clubs in the country.

The 23-year-old scored the opener against Hearts of Oak last weekend to increase his goal tally to 21 with four games remaining as they strolled to a 2-0 success at Bewkai.

The former Tema Youth also scored the only of the match against Kotoko during the first half of the season from a diving header.

He says he is thrilled with achieving his long cherish dream of scoring against the two giants.

â€œOf course Iâ€™m happy. Before this match I had scored against only Kotoko as couldnâ€™t find the net in the first leg against Hearts,â€ Baffour said

â€œI prayed for at least a goal even if it was from the penalty spot.

â€œThankfully my wish has been granted and I have scored against Hearts so my ne aim is to finish the season on a high,â€