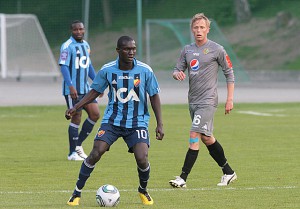 Heart of Lions striker Gilbert Fiamenyo scored on his debut game for Swedish side Djurgarden in a friendly over second-tier side EnkÃ¶ping on Thursday.

The 20-year-old arrived in Sweden on Wednesday and is keen to impress the Iron Stoves boss Magnus Pehrsson to hand him a deal.

Fiamenyo played for Djurgarden's Under-21 side and scored the second goal of the game.