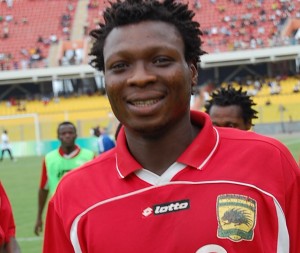 New Edubiase United striker Stephen Manu is on the verge of returning to giants Asante Kotoko after agreeing personal terms.

Manu moved to the Gyemfis Park last season and scored 6 goals in 12 matches but was forced out of action for the second half of the season through injury.

The lanky striker was transfer-listed at the end of last season by then head coach Ebo Mends.

He told Kumasi-based Angel FM: ''It?s true I have been in contact with Kotoko and have agreed on personal terms to play for them provided they can meet the requirements of my current employers."

"I would have liked to stay at Edubiase but they are a bit reluctant in meeting my demands so am sure of leaving the club for Kotoko where I have been before."

Reports are rife the deal is expected to be completed by the close of the week to enable the striker have undergo medical.