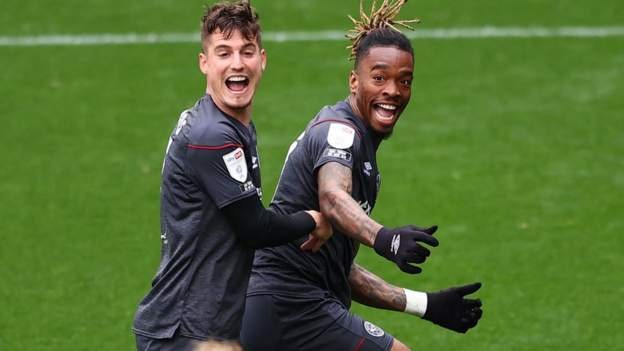 Ivan Toney scored his 31st goal of the season as Brentford warmed up for the play-offs with a stylish final-day victory over Championship strugglers Bristol City.

The Bees, who were already guaranteed to finish third, led when Toney reacted quickly in the box and rounded keeper Daniel Bentley before tapping the ball home.

Bryan Mbeumo made it 2-0 from a neat pass by Sergi Canos following a glorious team move.

Canos sealed a dominant win for the Bees, who face Bournemouth in the play-offs, with a first-time finish at the far post, before substitute Louis Britton struck a late consolation on his debut for the visitors.

A young Robins side, that saw 17-year-old academy product Alex Scott handed his first start, struggled against a team who always looked like securing a 24th win of the season.

Marcus Forss twice went close in the early stages while the visitors also had a strong penalty claim for a push on Toney.

Nahki Wells had the home side's best chance just before the break, but his close-range shot was blocked.

Brentford's pressure was finally rewarded thanks to Toney's composed finish and a much-deserved victory was wrapped up in the final minutes through Mbeumo and Canos.

Owura Edwards (Bristol City) wins a free kick in the attacking half.

Attempt missed. Sergi Canós (Brentford) right footed shot from the left side of the box is high and wide to the right.

Goal! Bristol City 0, Brentford 2. Bryan Mbeumo (Brentford) right footed shot from the centre of the box to the high centre of the goal. Assisted by Sergi Canós.

Louis Britton (Bristol City) is shown the yellow card for a bad foul.

Sergi Canós (Brentford) wins a free kick in the attacking half.

Attempt missed. Saman Ghoddos (Brentford) left footed shot from the left side of the box is close, but misses to the right. Assisted by Bryan Mbeumo following a fast break.

Attempt missed. Saman Ghoddos (Brentford) right footed shot from the right side of the box misses to the left. Assisted by Mads Rasmussen with a cross.

Attempt saved. Christian Nørgaard (Brentford) right footed shot from the centre of the box is saved in the bottom left corner. Assisted by Mathias Jensen with a cross.