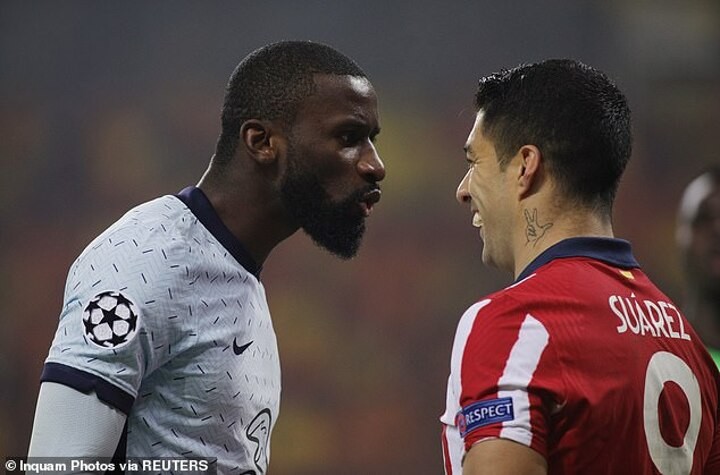 Luis Suarez got up to more antics on the football field again on Tuesday evening as Atletico Madrid took on Chelsea in the Champions League.

With Chelsea 1-0 up and cruising to a first leg victory in their last 16 game, Suarez and Antonio Rudiger got into a little confrontation by the goal line.

Looking at the replay from another angle, it became clear that Suarez had given Rudiger a cheeky pinch to the inside of his thigh.

Rudiger, clearly not impressed, had a few words for the Uruguayan as well as a push, and the pair squared up momentarily before being separated by the referee.

'When you're telling your kids off, and they go from biting to pinching, you're doing alright,' joked Joe Cole on BT Sport after the game.

Suarez has hit a history of biting opponents during games. In 2010 he was suspended for seven games after biting PSV Eindhoven's Otman Bakkal on the shoulder.

After moving from Ajax to Liverpool, Suarez was then suspended for 10 games following a bite on Branislav Ivanovic's arm in 2013.

And a year later, he was seen biting Giorgio Chiellini during a World Cup game against Italy.

Thankfully, he hasn't done it since then, but has apparently not gotten over his love of trying to physically get one over on his opponents.

'He's so, is cute the right word?' Said Rio Ferdinand on BT Sport. 'The referee is never going to see that, he's looking at their faces, but the real damage is done down there somewhere. It's like, street.'

Chelsea will host Atletico Madrid at Stamford Bridge with an away goal advantage thanks to Olivier Giroud's spectacular overhead kick in the second half.

It's nowhere near as serious as a bite, but it remains to be seen whether the Champions League will think there's any retroactive punishment to be made for Suarez's actions.