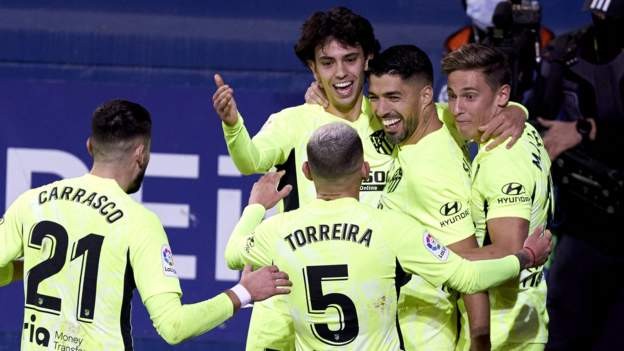 Luis Suarez now has 11 goals in La Liga this season

A Luis Suarez double sent Atletico Madrid seven points clear in La Liga as they recovered after goalkeeper Marko Dmitrovic had given Eibar the lead.

Dmitrovic, taking on penalty duties for the first time for his club, fired in his first career goal.

But Suarez levelled from a tight angle with a driven effort into the far corner after Eibar gave the ball away on the edge of their own box.

Suarez then netted the winner with a Panenka penalty in the 89th minute.

Dmitrovic was denied the chance to try to rescue his side a point when Eibar had a penalty rejected in injury time, as they appealed in vain for a handball against Atleti's Stefan Savic.

The Serb goalkeeper was the fourth player to take a penalty for Eibar in La Liga this season - before he stepped up, they had missed three out of five spot-kicks in the league, including their previous two.

It is a big win for Diego Simeone's side, who now have a strong grip on the title race in Spain.

As well as a seven-point advantage on second-placed Real Madrid, the reigning champions, and a 10-point lead over Barcelona, they have a game in hand on both.

Suarez, who joined the club after being released by Barca in the summer, has played a huge role in helping them achieve this, with Thursday's two goals taking him to 11 for the season - level with Lionel Messi.

Attempt saved. João Félix (Atlético de Madrid) right footed shot from the left side of the box is saved in the centre of the goal.

Jan Oblak (Atlético de Madrid) wins a free kick in the defensive half.

Penalty conceded by Anaitz Arbilla (Eibar) after a foul in the penalty area.

Edu Expósito (Eibar) wins a free kick in the defensive half.

Attempt missed. Yannick Carrasco (Atlético de Madrid) right footed shot from outside the box is just a bit too high from a direct free kick.

Anaitz Arbilla (Eibar) is shown the yellow card for a bad foul.

Luis Suárez (Atlético de Madrid) wins a free kick in the attacking half.