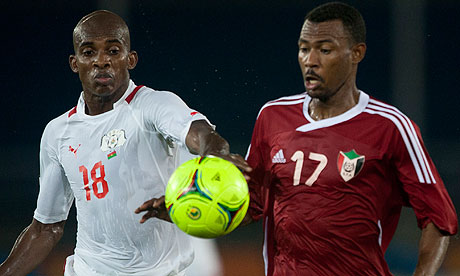 Sudan reached the quarter-finals of the African Cup of Nations for the first time in 42 years with a 2-1 defeat ofÂ Burkina FasoÂ on Monday.

The victory edged them above Angola in the Group B table on goal difference.

Mudather Eltaib scored both of Sudan's goals to deliver the nation's biggest sporting moment since it won the cup on home soil in 1970.

It was also Sudan's first win at the tournament since that triumph.

Eltaib broke clear to beat the Burkina Faso goalkeeper, Daouda DiakitÃ©, in the 33rd minute and then punished a mistake by the keeper in the second half to carry Sudan through, despite a 97th-minute goal from the BurkinabÃ©s.