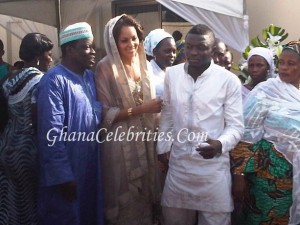 Menaye, looking resplendent, wore a dress that would appeal to Muntari's religion, a silky Indian robe and hijab (Islamic headscarf).

And Muntari's choice of outfit was an all white Pakistani outfit.

The couple tied the knot in an Islamic wedding ceremony which was restricted to close friends and family relations. This completes a quintuple for the player who has won the Italian Serie A, Coppa Italia, Uefa Champions League and Fifa Club World Cup trophies this year.

Muntari and Menaye have been dating for four years, after the Inter Milan player met her at a lobby of a hotel during the 2006 World Cup finals in Germany. The playerâ€™s love for Menaye nearly landed him into trouble in 2009 during a World Cup qualifier when his lover clashed with a police officer.

The Inter Milan ace spewed by saying he would quit the national team if the police officer did not apologize to her.

We at Ghanasoccernet.com wish Sulley and Menaye a blessed union.