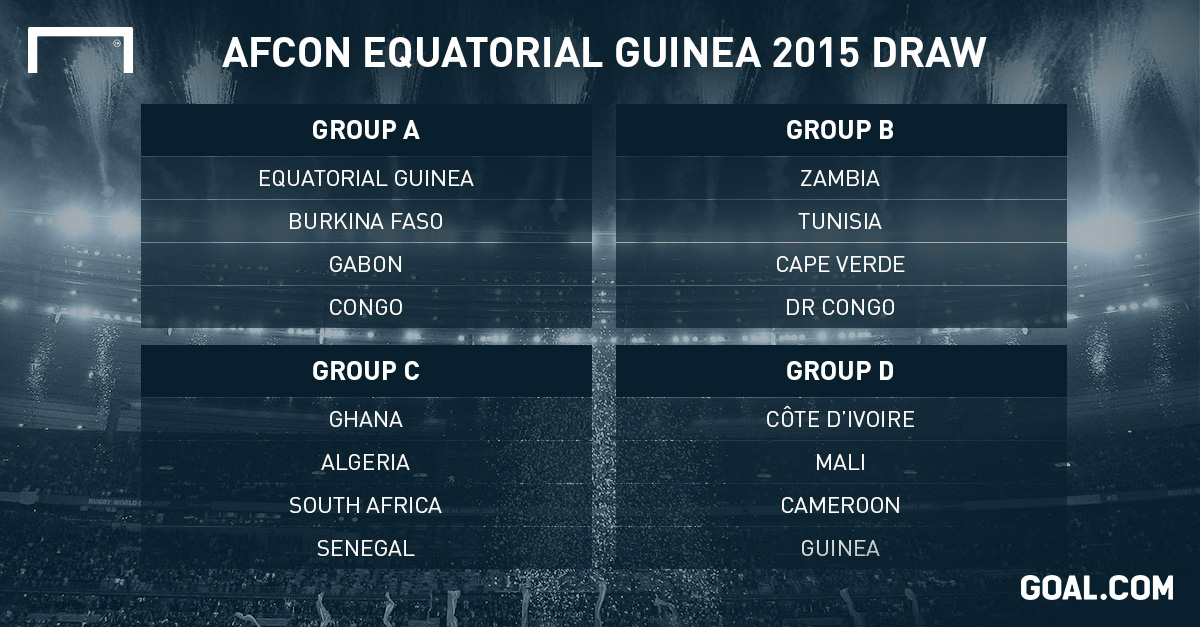 Full draw for the 2015 Africa Cup of Nations.

The draw for the Africa Cup of Nations highlighted prospects for a spectacular continental championship and it would be a big mistake to miss a minute of it.

Though defending champions Nigeria are absent, the presence of all the other African powerhouses (short of 'recovering' Egypt) assures quality and quantity.

The groups are well-balanced, except for group C, the group of death.

Ivory Coast come into this tournament with the certainty that this is definitely the last opportunity for their self-acclaimed golden generation to finally win gold!

There is much speculation as to the return from retirement by Chelsea's in-form striker, Didier Drogba.

Unlike recent years, it was a hard-fought battle to qualify for Ivory Coast and this could be a warning to the team as regards how the opponents see them these days.

South Africa are clearly a rejuvenated team, beaming with confidence and better tactics. By qualifying for its first major tournament without being hosts, they have showed improvement but will definitely not want it to end there.

The commendable manner in which they dominated the qualifiers, in a group that had defending champions Nigeria, is a warning sign to all opponents.

They could be the surprise of this group but powerhouses like Ghana and Africa's best team at the 2014 World Cup, Algeria, would beg to differ.

Algeria qualified with such ease it is alarming and worth commending. They were continuing in their tactical and physical progression shown in Brazil during the summer of 2014.

Is Cameroon done and dusted? Will they cope well in their first major tournament without Samuel Eto'o ? Are we going to witness in-fighting again from players and demands for bonuses?

What effect did Ebola have on Guinea? Will Guinea be able to use the psychological and moral support it receives to win the trophy as the Zambians did in 2012?

Africa's most prestigious sporting event kicks off and the above questions will be asked of the vying champions. The tournament is set to be covered, with much scrutiny, by the international world. It is a great opportunity to once again prove naysayers wrong regarding the African man's ability to move on in spite of adversity.

Tighten your seat belts. The Afcon rollercoaster is about to kick off!