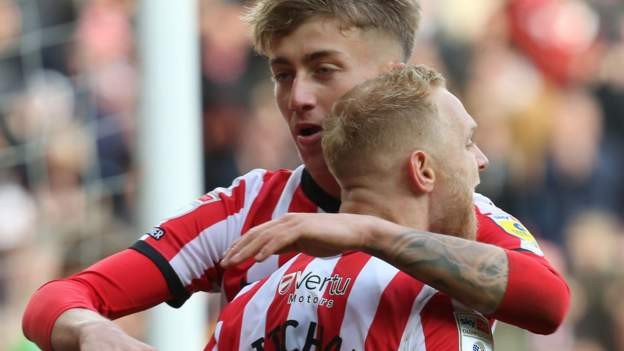 Sunderland's rousing second-half display secured a convincing victory against an in-form Millwall to move them within a point of the Championship top six.

After an insipid first 45 minutes in which Millwall's Zian Flemming missed a golden chance just before half-time, the Wearsiders hit the front soon after the break when Amad Diallo smashed home an Ellis Simms flick at the back post.

With the crowd fired up, and Sunderland's tails up, Alex Pritchard hammered his angled shot past George Long to double the lead shortly after, following good work by Lynden Gooch to pick him out.

Millwall were not quelled despite the setback, and Anthony Patterson had to be alert to turn over a swirling Flemming cross.

Simms finally put any fading hopes of a fightback to bed in stoppage time, when he latched on to a long ball over the top, lofted over the keeper and rolled the ball into an empty net.

Few inside the Stadium of Light on a chilly December afternoon could have predicted the second-half fireworks from the home side after an opening half which was punctuated by referee Tim Robinson's whistle.

The ball was an aside for much of the half, as both sides clattered and niggled, conceding free-kicks and failed to give creativity much of an option.

That said, Gary Rowett's visitors were the better side initially with possession and some impressive touches out wide from Andreas Voglsammer in particular, but failed to create too many clear-cut chances.

Diallo should have shot when he instead tried to be cute inside the box for Sunderland, while Flemming was handed a gift of a chance in the final seconds of the half after Patterson's careless clearance was placed straight to him, but the snapshot trickled wide.

Whatever Mowbray said to his players at the break had a regenerative effect, as they found rhythm and purpose to their play.

Pritchard was a major influence, playing a key role in one goal and scoring the other, before making way for Elliot Embleton.

Simms' running of the channels allowed Sunderland to bypass the giant Charlie Cresswell and Jake Cooper at the back, as Millwall's earlier dominance evaporated, and his late goal was reward for that toil.

While Sunderland edge closer to the play-off places, the loss sees Millwall drop out on goal difference.

Attempt saved. Scott Malone (Millwall) left footed shot from outside the box is saved in the centre of the goal. Assisted by Jamie Shackleton.

Attempt blocked. Mason Bennett (Millwall) left footed shot from the left side of the box is blocked. Assisted by Scott Malone.

Daniel Neil (Sunderland) wins a free kick in the attacking half.

Attempt saved. Billy Mitchell (Millwall) right footed shot from outside the box is saved in the top right corner.

Ellis Simms (Sunderland) wins a free kick in the defensive half.