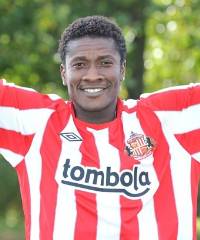 The powerful frontman spent all day in the north-east thrashing out a deal before finally agreeing to make the switch from French club Rennes 20 minutes before the 6pm deadline.

Gyan, 24, scored three goals for Ghana in South Africa, helping his side to the quarter-finals before going out to Uruguay.

The fee, which could rise above Â£13m, is significantly higher than the record Â£10m the Black Cats paid Tottenham for Darren Bent last summer and Bruce believes his new acquisition is worth every penny.

See video of Gyan arrival at Sunderland and Bruce's thoughts below

â€œAs anyone who has watched Ghana recently or who watched the World Cup will tell you, Asamoah is a real livewire,â€ he said.

â€œHe had a fantastic tournament in the summer and a lot of European clubs sat up and took notice.

â€œI have been very keen to bring in another striker to add to the quality we have, but only when we felt the deal was right.

â€œWe feel this is a great deal for the football club and Asamoah really wants to be here and in the Premier League, so Iâ€™m delighted he has joined us.â€

Gyan comes in to strengthen a Sunderland strike force, which has been weakened by the Â£8m departure of Kenwyne Jones to Stoke and now a crippling injury to Fraizer Campbell.

Campbell ruptured his cruciate knee ligaments in the 1-0 victory over Manchester City on Sunday and could now be out for the rest of the season.

â€œIt's a tragedy,â€ Bruce added. â€œHe was just starting to show what he was about. But make no mistake heâ€™ll be back and heâ€™ll be firing again.â€

Gyanâ€™s arrival paved the way for young striker Martyn Waghorn to join Leicester City in a deal which could rise to Â£3m.

Accra-born Gyan is an international team-mate of loan signing John Mensah, who has seen at close hand just how dangerous he can be.

The striker has scored 22 goals in 44 international appearances, a record which marks him out as a genuine threat.

He began his career in his native country with Liberty Professionals before for heading for Italy and Udinese, from where he was loaned to Modena at one point.

Gyan scored the quickest goal at the 2006 World Cup finals in Germany, where he struck after just 68 seconds against the Czech Republic.

He headed for Rennes in an 8million Euros move in July 2008, making 47 appearances and scoring 14 times.

He could make his debut after the international break in the Black Cats' league trip to Wigan on September 11.