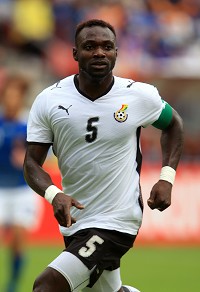 Steve Bruce reacted to the now-infamous derby defeat to Newcastle United by recalling the classy Ghana captain to the heart of his defence for last weekâ€™s visit of Stoke City.

However, the on-loan defender lasted little over an hour before succumbing to obvious pain from his left shoulder.

Sunderland sent the 27-year-old to have the problem checked out by a specialist yesterday, but they fear the worst.

Black Cats manager Bruce said: â€œWe think on the scans he dislocated his shoulder last week and it went back in.

â€œWe are looking to see how bad that is, and what the next stage is.

â€œHe played on manfully but he is still sore.â€

Mensah has started just 16 Premier League matches since joining on loan from Lyon in August 2009.

When fit, Mensah is one of the best defenders in the league, but he is rarely able to train because of a chronic problem with his spinal chord.

It is for that reason Sunderland are loaning the player, rather than having bought him.

However, a fully-fit Mensah would probably command a fee which would be out of the reach of the Wearsiders anyway.