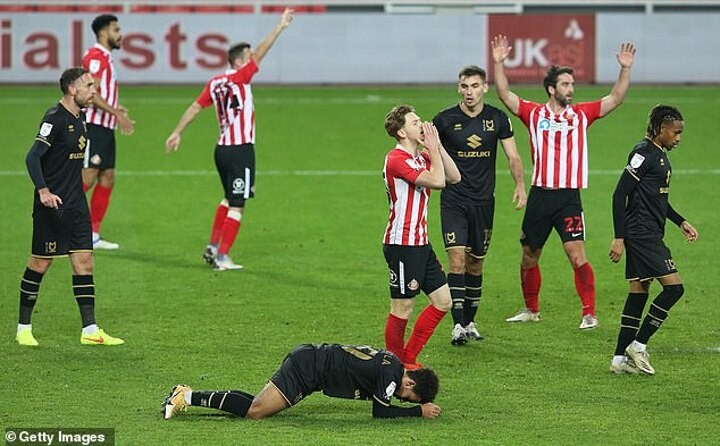 Sunderland sacked manager Phil Parkinson on Sunday after five games without a win left the beleaguered Black Cats seven points off the pace in League One.

Having plummeted from the top flight in 2017, the club have been in a sorry state.

Here, Sportsmail asks die hard Sunderland fan Jon Stokoe to shed light on what has gone wrong and what the club need to do to come alive again.

Well, as it happens, this season it has been incredibly dull.

Since the fateful day my Uncle James 'treated' me to a surprise birthday trip to see Sunderland play Spurs at Roker Park on April 7, 1984, I've been hooked.

But the past few months it has even tested my ridiculous red and white optimism. And I'm far from the only one.

Granted, looking at the league table like various pundits and former players have, you'd be forgiven for thinking that we're not in too bad a shape.

At the time of writing, the once-dubbed 'Bank of England club' is languishing in eighth place in League One, five points off second place, with a game in hand.

Only two defeats, unbeaten away from home and one of the meanest defences has meant, in some quarters, ex-Bolton Wanderers and Bradford City boss Phil Parkinson gaffer has been heralded as doing a decent job.

So his dismissal, will, to those 'experts', have been a surprise.

But for a good 95% of Sunderland fans it's not before time. Why?

Post-match interviews with Parky waxing lyrical about another feeble draw after throwing away leads at Rochdale, Doncaster and Fleetwood.

Contrast that to 1,665 days ago (May 12 2016) – Big Sam Allardyce beating his chest and swaggering around the pitch to a cacophony of pride, elation and raw emotion after SAFC had beaten Everton 3-0 at the Stadium of Light to stave off relegation yet again.

Until the FA swiped Big Sam away for his ill-fated one game spell in charge of England, things were looking rosy and since then my beloved Sunderland have been in freefall.

The rot began to set in when the dour, and utterly hopeless, David Moyes was appointed.

Taking over Big Sam's team, we had hopes of gatecrashing the top half of the Premier League but Moyes had other ideas.

Proclaiming we were in a relegation battle after defeat at home to Middlesbrough in only the second game of the season was the start of our pathetic capitulation.

In fact, I'd go as far to say the Moyester of excuses is hugely responsible for our predicament we now find ourselves in.

But it would be unfair to blame our third consecutive season in League One entirely on Moyes who I rank even worse than Lawrie 'Mackemenemy' and Howard Wilkinson – and that's saying something.

There are many things wrong at our football club. But as many of you who will have seen the second series of Netflix's Sunderland 'til I Die, all of those of a red and white persuasion had a new sense of optimism.

Donald, a successful millionaire businessman, and the red-trousered buffoon and supposed PR guru Methven, struck a deal to buy the club from wantaway US billionaire Ellis Short.

Understandably, the London-based billionaire was sick and tired of bankrolling the club which kept spending eye-watering amounts of money on and off the pitch.

A successful football club is not just about the manager, it's about the backroom team and those in the boardroom too, and, unfortunately, our present day shambles sees us failing in all departments.

It was a missed penalty kick by Lee Cattermole and his belly button high shorts against Charlton in the play-off final which consigned us to a second season in League One.

But that wasn't in Mr Donald's business plan which is where his bold project has unravelled.

And last season the PPG ratio ended our hopes of escaping the league as we were outside the play-offs – our own stupid fault.

But for me and many other Sunderland fans this latest chapter in the circus that is SAFC has taken things to a whole new level.

I've met Mr Chairman on several occasions, in Sunderland, and down in London the year before last, where, in typical Mackem style, we lost twice at Wembley in just over a month.

I actually liked him. He seemed to 'get' the club.

But now we're desperate that young millionaire Kyril Louis-Dreyfus, is to be our new saviour.

His first task – if all goes according to plan – is to bring in a manager which shows that failure is not an option for Sunderland. Not in League One anyway.

If I was going pie in the sky, I'd love Big Sam back for some 'unfinished business'. It's unlikely. Roy Keane would also excite the majority of fans like last time around. But it's unlikely. And I wouldn't be disappointed to see Nigel Pearson come in with Stadium of Light legend Kevin Phillips. But it's unlikely.

I just want a manager with a bit of charisma, some tactics, a plan B, understands you can use substitutions and has an eye for bringing through the next young Mackems like Jordan Henderson and Jordan Pickford. That's not much to ask is it? It was for Parky.

When all said and done, WE ARE SUNDERLAND.

We don't have that same divine right to success mentality like some Liverpool and Manchester United fans.

But what we do demand is a team proud to play for the shirt and to make the people of Sunderland… and those suckers who travel to watch from all around the country – proud.

These laughing stock days have to be consigned to the history books to keep the Barcodes up the road quiet, and to stop my season ticket holding wife Michala, son Luke and daughter Daisy grumpily 'thanking me' for introducing them to a life of Sunderland.

I can only mutter, 'It's my Uncle's James' fault,' so many times.

But, in a masochistic way, I'll be forever grateful, I think.

But when we enjoy the good times, bloody hell, we don't half do 'em well.

There are no other fans like it in this country. Okay, we can be fickle but you earn that right to be fickle by turning up week in and week out, only to be kicked in the you-know-whats time and time again, before going back for more.

It's tribal you see. We live and breathe our football. It's more than just a couple of hours on a weekend, it's in our blood, and we can't shake it off, seven days a week, 365 days a year.

I just hope some good times are ahead. A win at Wembley with 40,000 of us and our red and white scarves aloft singing 'Wise Men Say' would be nice, preferably before this 46-year-old tears the rest of his hair out.