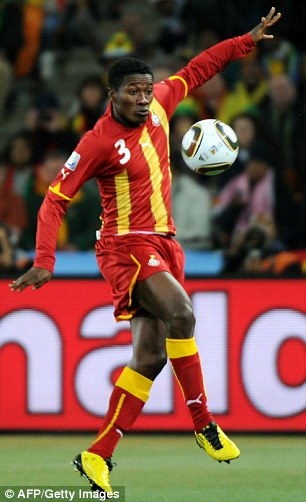 The Black Cats are in talks as they attempt to recruit a replacement for Kenwyne Jones ahead of Tuesday's transfer deadline.

Their need became more acute on Sunday when Fraizer Campbell, who had been partnering Darren Bent, suffered suspected knee ligament damage during the 1-0 Barclays Premier League victory over Manchester City.

Gyan, 24, an international colleague of on-loan defender John Mensah, was one of the stars of the World Cup finals and has been in manager Steve Bruce's sights all summer.

Sunderland have vowed not to spend for spending's sake, but Jones' Â£8million departure for Stoke has left a major hole in their attack, and while Campbell has impressed, Bruce has been keen to recruit a proven goalscorer.

Speaking after Sunday's game as he awaited news of the former Manchester United youngster's injury, Bruce was hoping chairman Niall Quinn would be able to make a breakthrough.

He said: "It's imperative, the chairman knows that.

"It was imperative before we started, so if we are going to lose Fraizer for a few months, then we have got to try to act if we possibly can."