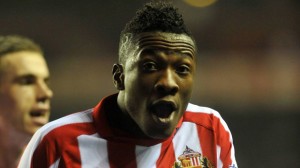 Sunderland have been told to forget their plans to bring striker Asamoah Gyan back to the Stadium of Light by Al Ain.

The Ghana international joined the United Arab Emirates outfit in the summer transfer window on a season-long loan but had been linked with a possible Wearside return in recent days.

Â admitted he was considering a possible return for Gyan after being brought in to replaceÂ Steve Bruce,

Â but it has now been reported that the Black Cats have no recall option on the 26-year-old.

And Al Ain manager Cosmin Olaroiu believes the striker, who has scored seven goals in as many games for his new club, will not be returning to his parent side.

"I think he feels good here, we supported him to get back into shape and to do good things for the national team in theÂ African Nations Cup,

"It is also my opinion that he feels something for this team and for the people who work with him, and he will remain here."

Â fans were less than impressed by the manner of Gyan's departure, given the timing of his exit, the standard of the club he moved to, and the hole it left in Bruce's striking options.

And the forward has refused to be drawn on what his plans are for when the loan deal concludes at the end of this season.

Gyan said recently: "For now, I can't really say anything about Sunderland.

"I am on loan for a year so we will have to see what happens at the end of the season. I am doing well. So let's see where my future lies after my loan deal."