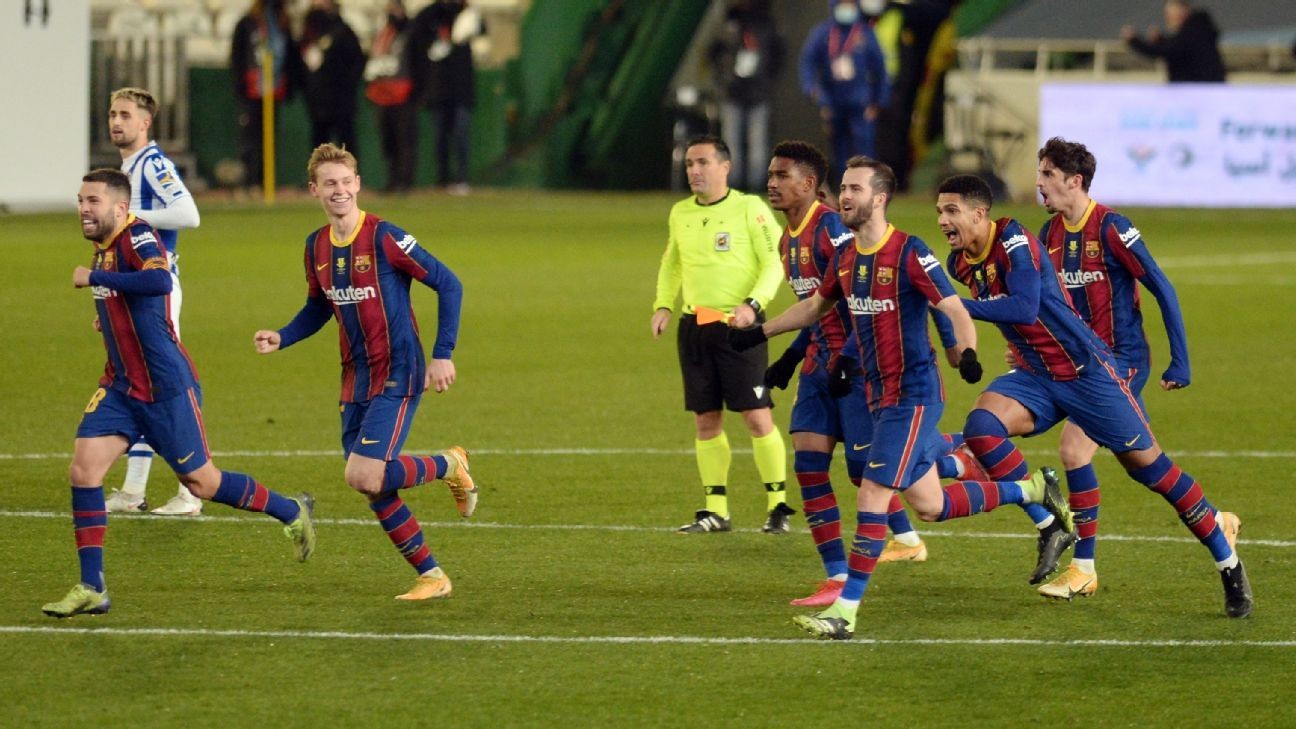 No one could wipe the grin off Riqui Puig's face. At the end of 120 minutes in the Spanish Super Cup semifinal, Barcelona were still standing, somehow. Marc-Andre ter Stegen had rescued them repeatedly, but his work was not done yet and nor was theirs. They still lingered on the edge.

It was late, it was Barcelona 1-1 Real Sociedad, and it was time for penalties.

Standing at the side of the pitch in Seville, Barca manager Ronald Koeman held a piece of paper. On it was a list of penalty takers, just four names: Frenkie de Jong, Ousmane Dembele, Miralem Pjanic and Antoine Griezmann. Which wasn't enough. He looked at the men standing around him; there was no obvious candidate, no one to trust, with the fifth and final spot-kick. (And, by the way, why not get Ter Stegen to take one?) That was when Puig, of all people, spoke up.

In the summer, Puig had been told to leave and seek opportunity elsewhere. Koeman had publicly said that it would be better if he went. Privately, he had accused Puig of leaking conversations.

Koeman didn't just not like him as a player, it seemed; he didn't like him, full stop, or at least didn't like the noise around him. Puig was a cause celebre, a bit of a campaign building around him, the kind of campaign so often launched on a player's behalf, but that in truth does him no favours, everything exaggerated.

At 90 minutes, Koeman had made just one change, and Puig wasn't one of them. When extra time came, though, so did he. Sent on, Puig played more minutes than he did in half a league season put together. And now this, the fifth penalty, a final waiting. De Jong had hit the post, Griezmann had sent his shot into orbit, and it was down to Puig. Some way away, Barcelona's players waited and watched.

He took it superbly, the ball flying into the net. As it did so, Barcelona's players turned and ran straight at... Ter Stegen. Puig held the Barcelona badge on his shirt and ran to join them.

Barcelona's joy on penalties, without Lionel Messi, was just what the club needed amid a difficult season. CRISTINA QUICLER/AFP via Getty Images

Ter Stegen had saved penalties from Jon Bautista and Mikel Oyarzabal -- the man who had scored all 16 spot kicks he had taken in his career -- and Puig had put Barcelona through to the final. At the end, as he stood before the TV cameras, Griezmann came and hugged him. "I owe you a dinner," he said.

From the poshest part of Barcelona, pretty much the poshest part of Spain in fact, Puig beamed, looking very much the chuffed little boy. Almost angelic, like some handsome, clean-living hero from a wholesome TV series, the kind of kid who should be called Corey. So very, very... nice. The smile -- perfect teeth, nice smell, a class act all the way -- was going nowhere. "I will never lose that," he said.

It had been hard, he said, and he was never going to throw in the towel; equally, nor would he whine.

"If Ronald gives me minutes, I'll be grateful and make the most of it; if not. I'll keep working," he said. "I have my health, my family, I can't complain about anything."

He has his final now, too. Whether he'll play in it is another matter.

So is the Spanish Football Federation, which does not have its final -- at least not the final between Real Madrid and Barcelona that it had been hoping for. But here's the thing: it might be better this way, another demonstration of football's refusal to be controlled. Of the desire to rebel, to compete, to follow no script. The capacity to keep surprising us. Because without that, although some refuse to see this, football is nothing.

The draw for the Spanish Super Cup had been managed to increase the chances of a Clasico in the final. Real Madrid and Barcelona were kept apart, deliberately. They couldn't go to Saudi Arabia as planned, forced to hold the competition in Andalucia instead, but the hope remained to deliver a final between those two, the teams with the greatest global pull.

Last year's Copa del Rey showed the risk -- Athletic Bilbao and Real Sociedad knocked out Barcelona and Madrid in the semifinals on the same night -- and now that was underlined once more.

On Wednesday, Puig had taken Barcelona to the final. Just. Real Sociedad had dragged Barcelona to penalties -- "I said we were favourites and it showed," La Real coach Imanol Alguacil said afterwards -- but Koeman's team had held on and squeezed through. "Lots of players cried in the dressing room," Imanol admitted. The following night Athletic actually did knock out Real Madrid, Raul Garcia scoring twice.

play1:49Are the pieces finally falling into place for Barca?

There will be no Clasico final. There might, though, be a classic final, if a final without fans can ever be called that. Athletic Bilbao and Barcelona are two of the three teams never to have been relegated from Spain's first division. The two teams that have won more cups than anyone else, ever. Two teams with a rich football history and a depth of identity that goes well beyond the pitch -- institutions with a huge cultural significance.

At the end of their 2-1 semifinal win over Real Madrid, Athletic manager Marcelino Garcia Toral stood with his arm around Sergio Ramos and watched his players celebrate. He had only been in the job 10 days and already he was in a final, gratefully acknowledging the man who had brought them here by reaching last year's Copa del Rey final: his predecessor, Gaizka Garitano.

"It's been a nice, easy start," he said, laughing.

It is early, but there are signs of improvement from Athletic, a renewed aggressiveness about them. They had said they believed in themselves, and then showed that it wasn't just idle talk. Against Madrid, they pressed high, rolling over their opponents at times in the first half and resisting in the second. Against Barcelona, they lost 3-2, Marcelino declaring himself satisfied afterwards -- at least with the opening 20 minutes or so. After that, he admitted, Barca had been the better team.

That Barcelona are even a good team is news, but it is true at last. Koeman was asked after that meeting at San Mames if it was the best Barcelona performance of the season. "A great display," he called it. Three days later, they beat Granada 4-0.

Third in La Liga, little more than a week after Koeman more or less conceded that they could not win the league, things are starting to fall into place. Ronald Araujo is leading the defence, the shape of the midfield has improved, the gap between the defence and a splodge of forwards is closed now, there are tentative glimpses Griezmann could find a role after all, De Jong is unleashed, enjoying freedom at last, and Pedri ... well, Pedri's Pedri.

play0:49Faez: Messi will already be talking to other clubs

Against Athletic, Messi scored twice. Against Granada, he scored twice more. One of them was the classic Messi shot, from right of centre to the top-left corner; the shot that had deserted him all season was back again. The outlier on every graph, football's very own "apart from," occupying a category of his own, in the two worst seasons of his career -- last season and this season so far -- Messi was top scorer.

"Before the game, I thought: 'I hope Messi's not right,'" Marcelino admitted. "'I hope he's not at his top level now that I'm coming back to football.'"

On Sunday, at least he won't have that problem. Or maybe he will.

Messi was injured and forced to sit out the semifinal. He watched from the touchline as a lovely move lasting 75 seconds, containing 25 passes and involving 10 players concluded with De Jong scoring. He watched too as La Real went for his team. He sat, unable to help as Griezmann, the man who scored 14 penalties in a row before joining Barcelona, missed his fifth consecutive spot kick. He applauded, barely able to believe it, as Ter Stegen saved them.

With the rest, Messi raised his arms in celebration when Puig put them though, giving him the chance of making the final. He still might not get there: Barcelona are being cautious but it's still too close to call. There might be another major absence, another hole, as the Spanish Super Cup begins on Sunday. But then, as this week proved once again, football so often finds a way, another path, another player, however unexpected and all the better for it. Someone prepared to step up and say "I'll do it," someone to end the night wearing a smile the size of Spain.