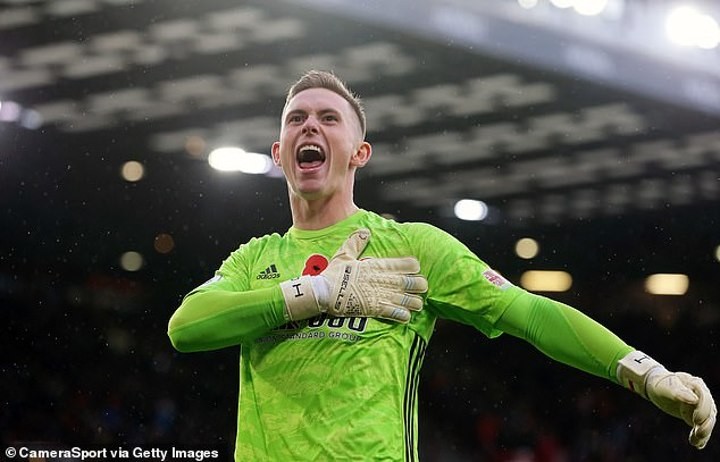 The suspension of football came at the worst time for Dean Henderson who was enjoying his best season of professional football.

The Manchester United goalkeeper has spent the last two seasons on loan at Sheffield United and has quickly become a fan favourite.

Henderson helped the Blades achieve promotion from the Championship with the most clean sheets in the division and has more than made the step-up to the Premier League this year.

Chris Wilder's side have been the surprise team of the 2019-2020 campaign. The club were seventh when football was halted, five points behind fourth-placed Chelsea with a game in-hand.

Henderson has kept 10 clean sheets, level with Ederson and Kasper Schmeichel and only Nick Pope and Alisson have kept more.

His manager has described him as 'outstanding' and made clear he would be thrilled to have him in South Yorkshire for at least another season, if not permanently. But could he challenge David de Gea for the No 1 jersey at Old Trafford?

United tied down both of their goalkeepers to new contracts in the summer.

Henderson's deal runs until 2022 with the option of an extra year but importantly de Gea's lasts until 2023, also with a one year extension option.

The Spaniard's last two seasons for the Red Devils have been below the high standards he has previously set for himself.

The 29-year-old has made a number of high-profile errors with the most recent one coming against Everton when his misplaced clearance led to the Toffees' opener.

In fact, de Gea is at the top of the list for the most errors leading directly to a goal since the start of the 2018-2019 campaign.

Henderson has too made his fair share of blunders. Last season the shot-stopper cost his team a point against promotion and Yorkshire rivals Leeds United when he gave the ball away.

In the summer he was partly at fault for England under-21's early exit from the European Championships after fumbling a long-range shot in a defeat by Romania.

And this season he cost the Blades what would have been a historic point at home to Liverpool after dropping Georginio Wijnaldum's tame effort into the net.

But importantly, the youngster has shown character to comeback from his mistakes and after a dressing down from boss Wilder.

He has been almost faultless since his error against the Reds and his manager said he has shown 'great mental strength' to overcome the pain he felt after that game.

Sky Sports pundit Jamie Carragher selected Henderson in his team of the season so far but also believes he should stay at Sheffield United if he wants to be England's No1.

Former Red Devils 'keeper Peter Schmeichel recently gave his view on who should be first choice at Old Trafford and the Dane was clear that the Spaniard should keep the shirt until Henderson has consistently proven his ability in the Premier League.

De Gea is the highest paid player at United and with a further three, potentially four, years left to run on his contract, Henderson may have to bide his time.

The desire to play regular football could see him return to the Blades for another year but there will come a point where he may have to commit his future to one club.

Ben Foster had two loan spells and two seasons sat on the bench during his five years at Old Trafford. His lack of game time put him down the international pecking order and he failed to ever become United's first choice. Henderson will want to avoid the same fate.

Henderson's impressive season had led to suggestions he could usurp Jordan Pickford as England's No 1 before this summer's Euros were cancelled.

The Everton shot-stopper has endured a more testing campaign, with just six clean sheets and several costly mistakes to his name.

However, the postponement of the tournament gives Henderson another year to prove himself.

Gareth Southgate only called him into the senior squad in October and he is yet to make his Three Lions debut. The chances of the England manager opting for Henderson would have been slim.

Southgate is also known to favour Pickford for his passing ability and the Toffees' 'keeper has made over 200 more passes than Henderson in the league this season.

It would have been a similar situation to the one Joe Hart found himself in during the 2010 World Cup. He was arguably the in-form English 'keeper but young and inexperienced which meant Rob Green and David James were ahead of him - Fabio Capello said as much in a recent interview.

Henderson may also have been third choice behind Nick Pope who has two senior caps. The Burnley 'keeper may have one more clean sheet than Henderson this season but he has conceded 18 more goals.

The only team to score more than two goals against the Blades are Manchester United with Henderson unable to play in the fixture against his parent club.

While the break in football may have come at one of the most exciting times in his career, Henderson undoubtedly has a bright future and the potential to become United and England's No1 for a long time.