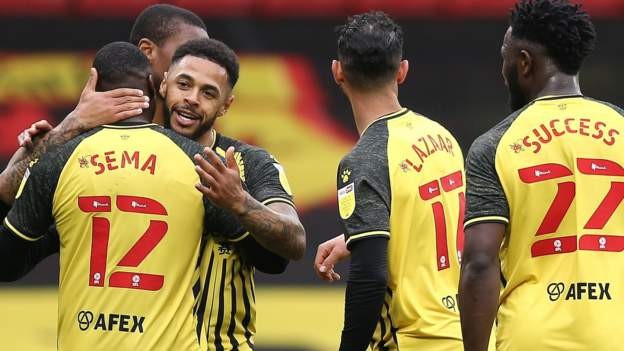 Andre Gray's goal for Watford was his fifth of the season

Swansea City will face Barnsley in the Championship play-offs after ending the regular season with a defeat at promoted Watford.

The Swans shaded a goalless first half with Andre Ayew and Matt Grimes denied by Hornets goalkeeper Ben Foster.

Andre Gray instinctively turned in Ken Sema's cross to put Watford ahead before Isaac Success added a second late on with a fabulous strike.

The result means Swansea finish fourth in the table, with Watford second.

Meanwhile, Barnsley drew with champions Norwich City to leapfrog Bournemouth - who lost at home to Stoke - into fifth place.

That means Barnsley will host Swansea in the first leg of their play-off semi-final on Monday, 17 May, with the return fixture at the Liberty Stadium the following Saturday.

Having secured their instant return to the Premier League with two games to spare, Watford were welcomed on to the pitch at Vicarage Road with fireworks and yellow ticker tape.

EFL ups and downs as it happened

And with lifelong fan and former owner Sir Elton John watching from the stands, this felt like a celebration for the Hornets, even without a home crowd.

They created the first chance of the game, Sema breaking down the left wing and crossing to Philip Zinckernagel, whose first-time shot swerved narrowly wide.

Swansea had long been guaranteed their play-off place but, with their opponents dependent on their final league position, this was more than a mere training exercise.

Top scorer Ayew was restored to the starting line-up after injury and he came close to opening the scoring with a powerful seventh-minute shot which was blocked by Foster.

Swans captain Grimes forced Foster into another save with a firm hit from 20 yards and, despite starting the second half brightly with Liam Cullen firing over the bar, the visitors fell behind soon afterwards with a somewhat fortuitous goal.

Sema whipped in a dangerous cross from the left, which took a deflection off Swansea defender Marc Guehi before hitting Gray and flying into the net.

The visitors continued to create chances after falling behind but, careful not to over-exert themselves with the play-offs looming, important first-team players such as Grimes, Ayew, Conor Hourihane and Jamal Lowe were replaced.

Watford then wrapped up victory in the closing stages as Success lashed a fierce shot into the top corner to bring to a fitting end to a triumphant season which saw them return to the Premier League at the first attempt.

"You're always disappointed to lose. I quite liked us in the game - I didn't think it was a 2-0 game.

"We didn't threaten the goal enough, particularly in the second half, and they did. That was where the game was won and lost.

"We finished fourth, which I think is an excellent return, and now we can look forward to the play-offs.

"Going into these play-offs, we should fear nothing and go for it."

Attempt missed. Yan Dhanda (Swansea City) right footed shot from outside the box is too high from a direct free kick.

Jake Bidwell (Swansea City) wins a free kick in the attacking half.

Foul by Will Hughes (Watford).

Goal! Watford 2, Swansea City 0. Isaac Success (Watford) right footed shot from the right side of the box to the top left corner. Assisted by Marc Navarro.

Attempt saved. Achraf Lazaar (Watford) left footed shot from the left side of the box is saved in the top centre of the goal. Assisted by João Pedro.

Attempt missed. Yan Dhanda (Swansea City) right footed shot from the right side of the box is high and wide to the right. Assisted by Wayne Routledge following a corner.

Attempt missed. Yan Dhanda (Swansea City) right footed shot from the left side of the box is close, but misses to the right. Assisted by Conor Hourihane.