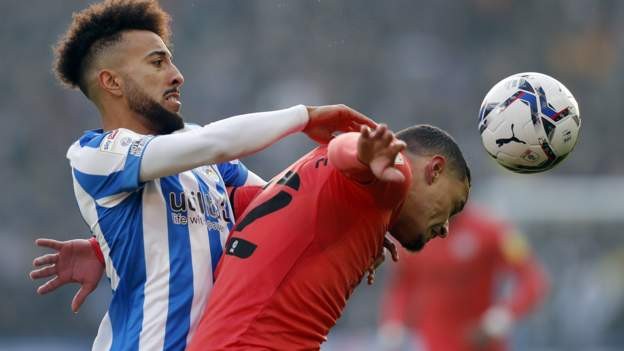 The Terriers were on course for a fourth victory in five league games after Sinani swept home on the rebound.

But Swansea surged back into the contest after the break and levelled as Downes steered in his first goal for the club.

Huddersfield drop a place to seventh in the table, while Swansea remain 17th.

This was a welcome point for Russell Martin's Swansea as they played a first league game in 35 days.

Carlos Corberan will feel his team could have been out of sight by half-time - though Swansea might have taken all three points given their dominance in the second period.

The Welsh club have just emerged from an unexpected winter break, with four straight league games postponed thanks to Covid-related issues.

They played - and were beaten by Southampton - in the FA Cup last weekend, but looked rusty early on as they returned to Championship action.

Lewis O'Brien drew a sharp save from Ben Hamer in the opening moments before Josh Koroma saw a close-range header ruled out for offside.

Swansea ought to have been two down when O'Brien met Sorba Thomas' centre only for ex-Huddersfield keeper Hamer - who was preferred to new signing Andrew Fisher - to make another fine stop.

Though they had plenty of possession, Swansea's only first-half efforts were strikes from outside the box from Ryan Manning and Matt Grimes.

Martin's team showed more purpose from the outset in the second half, with debutant Cyrus Christie forcing Lee Nicholls into a sharp save before Olivier Ntcham tested the Huddersfield keeper with a deflected drive.

The hosts were suddenly trapped in their defensive third, and were grateful to see Joel Piroe shoot too close to Nicholls after some fine footwork took him away from three defenders.

Substitute Michael Obafemi missed a golden chance to level as he burst into the penalty area only to see Nicholls save once more.

But the equaliser Swansea deserved based on their second-half efforts finally arrived when Downes fed Korey Smith on the right, then met Smith's return ball with a sidefoot finish into the far corner.

Both sides had chances to win it, with Danny Ward slicing wide before Piroe headed just past the post in the last seconds of added time.

With that Huddersfield's unbeaten run stretched to seven league games, while Swansea can take heart having fought back to end their three-game Championship losing streak.

"We couldn't keep playing in the second half like we played in the first half.

"In the second half we tried to be more aggressive but with the injury to Sinani, we didn't find the same solutions as in the first half.

"The game changed. Sinani was feeling the muscle, his hamstring."

"I am really proud of my guys. I felt it was an outstanding performance. We haven't played for five weeks in front of fans or in the league so I understood why we started a little bit tense.

"Huddersfield are a good team in really good form. We rode the storm. Unfortunately we conceded a goal in that period.

"But second half I am so proud of them. We have not had a full group for a very long time. We still haven't - we have a couple missing. That makes it even better for me.

"The intensity, the energy, the level of courage in the second half was incredible."

Attempt missed. Joël Piroe (Swansea City) header from the centre of the box is close, but misses to the right. Assisted by Michael Obafemi with a cross.

Michael Obafemi (Swansea City) wins a free kick in the attacking half.

Sorba Thomas (Huddersfield Town) wins a free kick in the defensive half.

Attempt missed. Danny Ward (Huddersfield Town) right footed shot from the centre of the box misses to the right. Assisted by Pipa.

Attempt saved. Lewis O'Brien (Huddersfield Town) right footed shot from the centre of the box is saved in the bottom right corner. Assisted by Pipa.

Attempt saved. Olivier Ntcham (Swansea City) right footed shot from outside the box is saved in the centre of the goal. Assisted by Joel Latibeaudiere.

Olivier Ntcham (Swansea City) wins a free kick in the attacking half.

Attempt saved. Lewis O'Brien (Huddersfield Town) left footed shot from outside the box is saved in the centre of the goal.