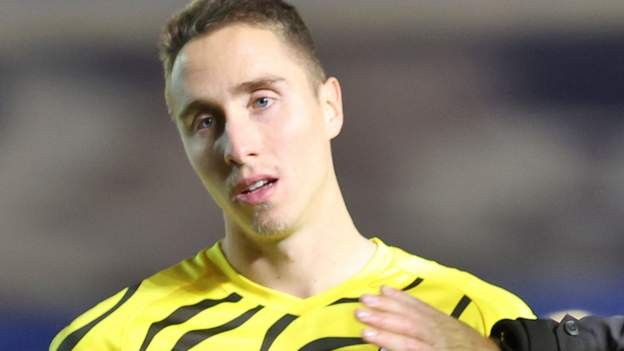 Swansea City goalkeeper Steven Benda could miss the rest of the season after suffering a "significant" knee injury.

Benda was forced off during the Championship side's 1-1 draw with Queens Park Rangers last weekend.

Swansea have not specified the nature of the injury but say scans have confirmed the 24-year-old is facing "a lengthy spell" on the sidelines, which is thought will extend to a number of months.

Benda will see a specialist this week.

Andy Fisher is expected to take over first-choice duties having replaced Benda at Loftus Road after the German fell awkwardly attempting to save a Jamal Lowe shot 10 minutes into the second half.

Signed from MK Dons last January, it was 24-year-old Fisher's first league appearance since August after Benda reclaimed the number one shirt at the Swansea.com Stadium, playing all 21 league games since.

The former 1860 Munich player has earned praise from Martin, who described Benda's form as "outstanding" after displacing Fisher.

Martin could now be forced into the transfer market as cover for Fisher with 21-year-old Lewis Webb Swansea's only other senior goalkeeper having returned from a loan spell at Cymru Premier side Aberystwyth Town.

Swansea, currently 12th in the table, do not play this weekend and are next in league action when they welcome Birmingham on 4 February.