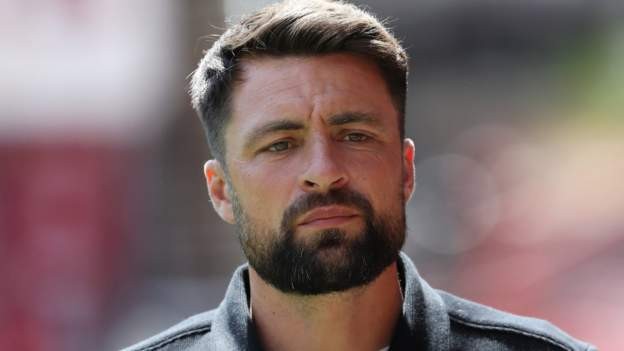 Swansea paid MK Dons around £400,000 to bring Russell Martin and his staff to Wales

Russell Martin says he would be happy to remain at Swansea City "for a long time" as he celebrates a year in charge at the Championship club.

Martin was named successor to Steve Cooper on 1 August, 2021.

Swansea's head coach is hoping for progress in 2022-23 after a 15th-placed finish in his first season at the club.

"It's up to us to make sure we are sitting here next year talking about two years in the job," Martin said.

"You never know what's going to happen in football, but are we happy here? Yes. Would we be happy to be here for a long time? Yes, 100%."

Martin, 36, signed a three-year deal when he left MK Dons to take over at Swansea and brought his management team with him.

He has overseen a change of style in his first season in Wales, restoring the kind of possession game which helped Swansea climb from League One to the Premier League and European football.

But the transition has not been easy, with a club who reached the play-offs in 2020 and again in 2021 finishing in the bottom half of the second tier amid cuts to their playing budget.

Nevertheless, Martin believes Swansea have made significant progress in the last 12 months.

"I feel like we have learned a hell of a lot in a year," he said.

"From when we first walked into the building to where we are now, we are really pleased.

"We are so grateful for that. I think the club is in a much better place in terms of the infrastructure off the pitch.

"The togetherness throughout the academy, the stadium, here [at the Fairwood training ground] - I am really pleased with that and really proud of what we have done behind the scenes.

"Hopefully that will be reflected on the pitch."

Swansea play their first home game of the new season against Blackburn Rovers next Saturday following their opening-day draw at Rotherham United.

Captain Matt Grimes, who signed a new long-term contract last season, says Martin has been "an absolute pleasure" to play under.

"His ideas, where he is taking the club, are very positive," the midfielder said.

"It shows how much I think of him and I respect him that I was in the last year of my contract and I signed a new deal just to play under him."

Grimes says Swansea's players needed time to get used to life under Martin because of his unusual philosophy.

"I don't think people realise how difficult it is, how much we have improved," he added.

"The way we dominate the ball in most games shouldn't be taken for granted.

"It's a completely different way of playing to what most of the players had experienced. We have all had a year of it now. I think the only way is up."