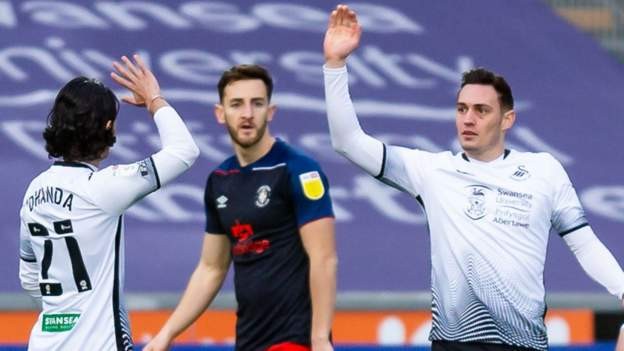 Swansea City climbed back into the Championship play-off places as they beat 10-man Luton Town thanks to goals from Connor Roberts and Andre Ayew.

Steve Cooper had been left bemoaning his team's performance after they were beaten for only the third time in the league this season at Middlesbrough on Wednesday.

But the smile returned to the Swansea head coach's face as they extended their unbeaten home run to five matches.

Luton will feel hard done by having created enough opportunities to get back into the game after Swansea went ahead in the second minute through Roberts' deflected shot.

But Swansea just did enough to hold on to their lead before Ayew's low drive sealed a third win in their last five matches.

Luton lost defender Matty Pearson 21 minutes from time when he was shown a second yellow card.

They drop a place to 12th in the table, while Swansea are two points from top spot in fourth.

Swansea have been hard to beat at home so far this season, while Luton have impressed on their travels since Nathan Jones returned to the club for a second spell as manager in May.

They were well beaten just along the motorway at Cardiff City last Saturday, yet Jones' side have banked 20 points from their 11 away fixtures before this.

Their hopes of further improving that fine record got off to a dreadful start as Swansea scored from the first attack of the game.

Korey Smith, Liam Cullen and Ayew were all involved in a sharp passing move before Roberts' left-footed shot sailed into the Luton net with the aid of a significant deflection.

But the visitors eventually found their feet, pressing Swansea high and forcing them into errors in possession.

Luton almost levelled when George Moncur's 25-yard curler was pushed on to the post by Freddie Woodman, and they really ought to have equalised when Ayew's loose ball handed Jordan Clark possession deep in Swansea territory.

Clark's cross was parried by Woodman straight to Luke Berry, who shot wastefully over from point-blank range with the goal at his mercy.

Swansea improved markedly in the early stages of the second half, yet it was Luton who had the first chance when substitute Harry Cornick headed wide as he stretched to reach Tom Lockyer's inviting cross.

The Hatters' cause was not helped when centre-back Pearson, who had been booked 11 minutes earlier for a cynical lunge on Ayew, was shown a second yellow card for catching Marc Guehi with a high boot as he attempted an overhead kick.

Still Luton asked questions, with Glen Rea rising high to meet James Bree's corner only for Ayew to clear off the line.

Ayew, Swansea's top scorer and attacking talisman, eventually killed off resilient Luton in the 89th minute when he collected possession from Kasey Palmer and rifled a fierce shot into the bottom corner of the net from 20 yards.

"We're very pleased with the result and large parts of the performance. It wasn't easy but I don't think any game is going to be easy in this schedule.

"The reality is we were in Nottingham on Sunday, Middlesbrough on Wednesday and then the best part of 48 hours later, you're playing again. It's tough. It is what it is to get the league up and running, but there's going to be no straightforward games for anybody.

"To show the character, resilience and to keep a clean sheet, after that week and with a little bit of a setback against Middlesbrough in how we played, it's really good sign of the mentality in the dressing room.

"In the end we showed enough quality in the game and enough resilience to get the right result."

Kazenga LuaLua (Luton Town) wins a free kick in the defensive half.

Attempt missed. Jamal Lowe (Swansea City) left footed shot from the left side of the box is high and wide to the left. Assisted by Kasey Palmer following a fast break.

Luke Berry (Luton Town) wins a free kick in the defensive half.

Attempt blocked. Glen Rea (Luton Town) header from the centre of the box is blocked. Assisted by James Bree with a cross.