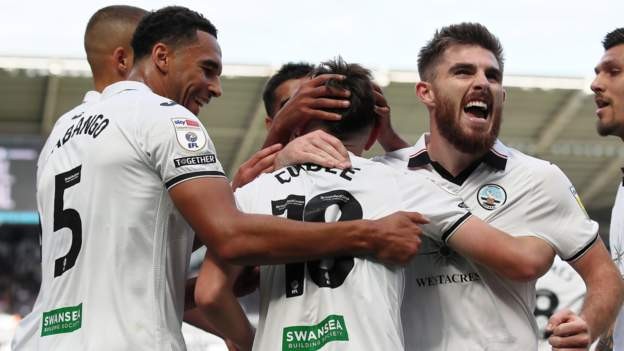 Swansea City climbed out of the Championship's bottom three thanks to a comfortable 3-0 victory over a disappointing Hull City.

The home side hit the woodwork three times before Ryan Manning's composed volley put them ahead.

Luke Cundle and Joel Piroe then took advantage of glaring defensive errors to seal a welcome win for Russell Martin's side.

But it was a bleak day for Hull as they fell to a fourth straight defeat.

Swansea's third victory of the season - and just their second in the last 10 attempts at home - saw the Welsh side jump from 22nd into mid-table ahead of the day's later games.

They go above Shota Arveladze's Hull team, who are enduring a worrying slump in form.

The 10-game point is viewed by many as the first significant landmark in the season, and both these clubs would have been hoping for better when the campaign began in July.

It was Swansea who looked hungrier to improve their situation from the outset, the home side dominating the opening exchanges and creating three golden chances which were not taken.

The first fell to their best finisher, Piroe, but he could only shoot against the bar having been picked out in the penalty area by Manning.

Hull were then opened up far too easily by Kyle Naughton's pass, but Piroe was left with head in hands once more as his half-volley flew wide.

Already Martin might have been wondering whether his team would pay for their wastefulness - but he need not have worried.

Ollie Cooper connected crisply with Jay Fulton's cross only for Hull keeper Nathan Baxter - making his first appearance of the season - to make a sharp save, before Cooper's follow-up effort deflected wide.

Captain Lewie Coyle led a rare Hull attack, cutting in from the right before pulling a shot wide, before Swansea came close again just before half-time as Ben Cabango found Piroe whose drive was pushed onto the bar by Baxter.

Hull briefly showed some intent in the second period, pressing Swansea for the first time and carving half a chance as Dimitrios Pelkas drove over.

Yet the visitors' woodwork was soon rattling again as Cundle - who had come on for the injured Joe Allen - tiptoed into space only to see his shot clip the bar.

The breakthrough finally came when Matty Sorinola found space on the right to loft a cross to the far post, where opposite wing-back Manning cushioned a volley into the ground and beyond Baxter.

Luke Cundle celebrates scoring the first goal of his career

Cooper's drive into the area ended when he stumbled over. With that Swansea's moment should have passed, but Tobias Figueirido tried to clear as Baxter came out in an attempt to gather.

The duo collided and ended up in a heap, leaving 20-year-old Cundle - making just his second appearance since joining on loan from Wolverhampton Wanderers - to roll the ball into an empty net.

It was Cundle's first senior goal. It will surely be a while before he scores a simpler one.

Any doubt over the result was wiped out when Hull gave away another goal, as Figueiredo's pass was cut out by Piroe and he steered in his fourth of the season from close range.

Attempt missed. Lewie Coyle (Hull City) left footed shot from outside the box is close, but misses to the right. Assisted by Tobias Figueiredo.

Greg Docherty (Hull City) is shown the yellow card for a bad foul.

Oliver Cooper (Swansea City) wins a free kick in the defensive half.

Nathan Wood (Swansea City) is shown the yellow card for a bad foul.

Ryan Longman (Hull City) wins a free kick in the attacking half.