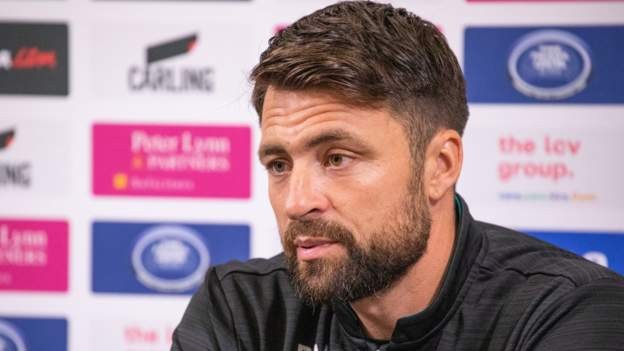 Russell Martin took over at Swansea a year ago this week

Russell Martin says Swansea City have no choice but to "do things differently" this season because they do not have the financial power to compete with most Championship clubs.

Martin believes his team "have a real chance to have an impact" in the second tier in 2022-23.

But he says there is a misconception that Swansea are one of the division's bigger spenders.

"The reality is there's no parachute payments," said the Swansea head coach.

"Because we were in the Premier League fairly recently, I think outside [the club], there's this expectation and suggestion that we're still really up there in terms of financial power - what we spend on players, what we invest in wages.

"We're just not. To be successful we are going to have to be different because of the financial limitations we have, compared to the majority of the league being honest."

Swansea have made four senior signings this summer, paying around £1.4m for Harry Darling and £400,000 for Nathan Wood.

Flynn Downes left for around £12m, while Ben Hamer, Yan Dhanda and Korey Smith were released at the end of last season and Cyrus Christie and Hannes Wolf departed at the end of loan spells.

Martin remains keen to add to his squad - which is still without a recognised right-wingback - but says potential dealings are at "a standstill" as Swansea wait for fringe players to move on.

"We're not going to be out there signing seasoned professionals," he added.

"Joe is an exception because of his connection to the club and how much he wanted to come back. It wasn't a financial decision for him at all, because if it was he wouldn't be here.

"Maybe people turned this job down before we came because of the limitations they were going to have financially.

"But it's a challenge we have embraced. We know what we have to work with, we try to do the very best we can within that."

After a draw at Rotherham on the opening day, Swansea face Blackburn Rovers in their first home fixture of the season on Saturday.

Martin says his side can follow the lead one of his former clubs, having won promotion to the top flight with Norwich City in 2011 and 2014.

"I have been at a club where we didn't have the financial power other clubs had and we got promoted to the Premier League," he said.

"That was purely on the back of hunger, desire, enthusiasm, connection with the supporters and belief in a way of doing things that carried us through.

"It was so powerful. It's up to us to bring everything we can to make us just as powerful as any financial resource can."

Allen will again miss out against Blackburn because of his hamstring problem, but is expected to make his second Swansea debut next week.

Striker Kyle Joseph is poised to leave on loan, with Oxford United and Sheffield Wednesday interested.