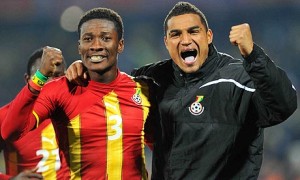 Sunderland record signing Asamoah Gyan will on Sunday lead the bulk of the Black Stars of Ghana who shone so brightly at the recent World Cup to a Nations Cup qualifying tie against Swaziland.

Gyan and company were only a penalty kick away from becoming the first African team to reach the semi-finals of the World Cup at the majestic Soccer City Stadium in Johannesburg.

The Somhlolo Stadium in Lobambo does not compare to Soccer City, neither do Swaziland compare to Uruguay who denied Ghana a more exalted place in football history.

The Swaziland team are known as Sihlangu Semnikati or the kingâ€™s shield, and inside a sold-out 50 000-capacity they will have to double up so as to defend the honour of this little, land-locked Southern African kingdom against the invading might from Ghana.

They finished bottom of a qualifying group for the 2010 Nations Cup that included Togo and Zambia, but no without upstaging 2006 World Cup finalists Togo 2-1 at home.

Star player is Orlando Pirates winger Dennis â€˜Yukiâ€™ Masina. The former SuperSport United and Aalst of Belgium ace has been an international since 1999 and at 28 still has a few more years in the service of the kingdom.

However, Masina was only left off the hook for nightclubbing in the build-up to this high-profile clash.

â€œItâ€™s going to be a difficult game because we donâ€™t know much about them and because we are going into the game as favourites, they will do everything to worry us,â€ said Andre Ayew, who was nominated for the Young Player Award at South Africa 2010.

â€œBut we will do everything possible to beat them. I am not worried about the game. I am cool.â€

Ghana skipper Stephen Appiah has called time on his international career, while Chelsea star Michael Essien has asked for a little time off.

Inter Milan midfielder Sulley Muntari has also been left out of this trip.

The ship has also been steadied with the retention of Serbian coach, Milovan Rajevac, on a new four-year contract as his initial contract ran out after the World Cup in South Africa.

Exciting young talent are also coming through none more promising than Jordan Ayew, two years younger than Andre. Ghana legend Abedi Pele has rated Jordan as the best of his three football-playing sons.

At only 18, he has a three-year professional contract with Olympique Marseille and made a goal-scoring debut for the French champions in December against Lorient.