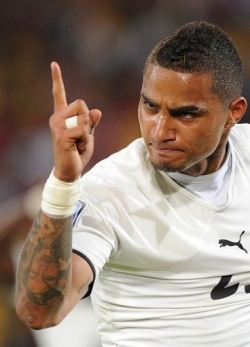 Swaziland midfielder Dennis Masina had identified Ghana enforcer Kevin Prince Boateng as the main threat ahead of their clash on Sunday.

The two sides meet in their 2012 African Cup of Nations qualifier at Somhlolo Stadium in Mbabane on Sunday.

Boateng is doubtful for the game after picking up a knee injury during training in Soweto on Tuesday.

Despite the likely absence of the AC Milan midfielder for the game, Masina insists Boateng is a danger even if he is not fully fit.

"I watched him when AC Milan played Barcelona recently he is a handful," Masina told Kickoff.

"It is no secret that Ghana has a lot of quality players but Boateng remains the danger man.

"He has got speed, the ability to take on players and is an all-round team player. We must keep a close watch on him."

The Swazi national team is currently camped in Mhlume in Lubombo region and has been boosted by the arrival of Santos winger Tony Tsabedze this week.

Other South Africa-based players in Swazi team are the Jomo Cosmos trio of Mfanafuthi Bhembe, Siza Dlamini and Phinda Dlamini.