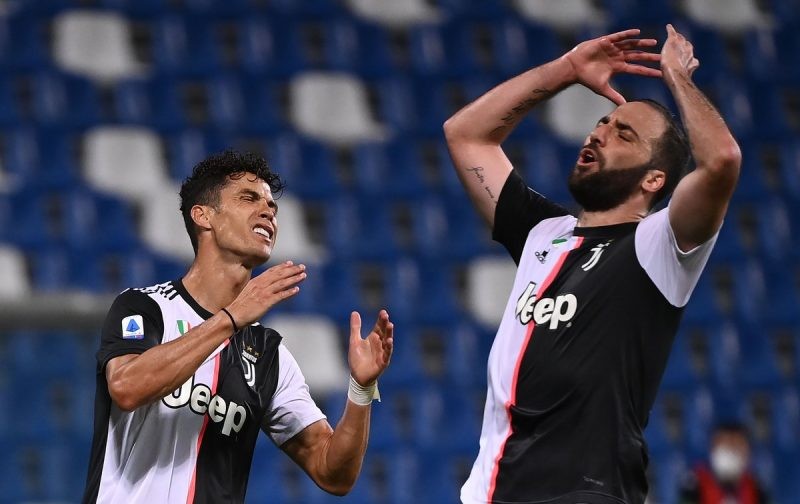 Juventus wasted a golden opportunity to strengthen their grip on the Scudetto as they threw away a two-goal advantage before being forced to comeback and salvage a 3-3 draw from their match with Sassuolo on Wednesday night.

The Bianconeri raced out to a 2-0 lead early on thanks to goals by Danilo and Gonzalo Higuain, but from there it was all Sassuolo, who cut into the advantage thanks to Filip Djuricic. Domenico Berardi and Francesco Caputo delivered a double hammer blow after the restart to put the home side ahead, but some sloppy marking allowed Alex Sandro to save the day for the Old Lady.

Juve relied on some Wojciech Szczesny brilliance to bring home a precious point in the closing stages as Sassuolo looked dangerous with every venture forward, meaning they now sit seven points up on Atalanta, though Inter could move to within six points of the leaders should they defeat SPAL on Thursday.

The Bianconeri flew out of the gates and took the lead thanks to some poor Sassuolo marking after just five minutes. Miralem Pjanic took a short corner that found its way to the unmarked Danilo, and he fired from the edge of the box into the back of the net to celebrate his birthday in style.

It was 2-0 shortly after with Pjanic once again in the middle of proceedings. The Bosnian picked out Higuain with a tidy through ball, and the Argentine stayed onside before beating Andrea Consigli one-on-one.

Sassuolo finally responded via Mert Muldur, only for Szczesny to get his fingertips on the shot from distance. The Polish goalkeeper then rushed out to deny Domenico Berardi from close range.

The Neroverdi began to settle into the contest from there and were duly rewarded in the 29th minute. Muldur and Francesco Caputo combined well, and the Italian laid the ball off for an onrushing Djuricic who fired into the top corner.

However the match turned on its head minutes after the restart. Juventus saw an indirect free kick in the Sassuolo penalty area blocked, but Berardi wasn’t as forgiving the other way as he curled a beautiful effort into the near top corner.

The comeback was complete three minutes later when Berardi found space down the right and rolled an enticing ball across the face of goal that Caputo slid in and fired home at the back post.

Unfortunately for Sassuolo they were only ahead for 10 minutes before some poor defending helped Juventus draw level. Alex Sandro was left all alone at the near post and beat Federico Peluso to the ball from a corner to set up a thrilling final 25 minutes.

Consigli did well to block a tricky Ronaldo effort with his feet as both teams looked for a winner, with Sassuolo somehow seeing several glorious opportunities go to waste.

Hamed Traore forced Szczesny into a great low save, while Boga collected the rebound, only for his effort to be cleared off the line by Alex Sandro.

Sassuolo mounted one last venture forward which resulted in Mehdi Bourabia lashing a dipping strike on goal, but Szczesny did just enough to push the ball over the bar to close out the spectacular contest.