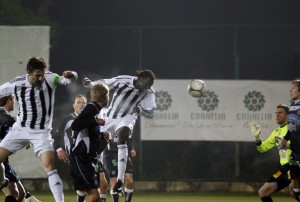 Ghana striker Prince Tagoe showed early signs of his credentials by scoring on Friday night for Partizan Belgrade in a 2-1 win over Austrian side Sturm Graz in a friendly.

His compatriot Dominic Adiyiah came off the bench in the second half and initiated the attack that led to the winning goal.

The two Ghanaian attackers joined the Serbian giants on loan last week in a bid to get more playing opportunities.

Tagoe, who joined Partizan on loan from Bundesliga side Hoffenheim, showed his predatory instincts by scoring in his first game for the Serbians.

He rose above his markers to head home Bobavic's corner-kick from the right for the opener on 16 minutes.

Graz regrouped and equalized in the 39th minute to finish the half 1-1.

After the break Partizan coach Stanojevic made seven changes to his starting line-up including Adiyiah who substituted Tagoe, for his first appearance since his loan move from AC Milan. Adiyiah's speed and skills caused havoc for the Graz backline.

He raced on the right and beat the left-back before sending a great ball to Ilic whose shot was parried into play for an unmarked Kuszko to slot home the winner in the 68th minute.