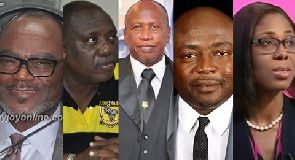 The General Manager of Techiman Eleven Wonders Takyi Arhin has has launched a scathing attack on the interim committee set up by the government of Ghana to oversee football in the country -labelling them as 'square pegs in a round hole.'

On Wednesday, the government of Ghana appointed a five-member Interim Management Committee which will be headed by Dr. Kofi Amoah and Abedi Pele to oversee the restructuring of Ghana Football.

Peace FM Sports Editor and owner/editor of the Ghana Sports newspaper Dan Kwaku Yeboah will serve as the committee’s spokesperson.

This decision to form an interim team to oversee a reformation of Ghana football follows the announcement by government that it plans on using all the legal process available to dissolve the current Ghana Football Association.

Government’s resolve to literally dismantle the current structure of the GFA comes on the back of the explosive exposé done by investigative journalist Anas Aremeyaw Anas which was premiered in Accra on June 6.

The exposé, which was done over a two-year span, captured several match officials receiving bribes to compromise Ghana Premiere League games. It also revealed the deep-seated rot and corruption at the FA when it comes to player selection into the various national teams, and how sponsorship deals for the league and national teams are dubiously negotiated.

Mr. Kwesi Nyantakyi who was the most high-profile personality caught in the exposé has since resigned as GFA President, and has also relinquish his position as CAF Vice President, WAFA Zone B President and FIFA Executive Council Member. He is also currently serving a 90- day suspension by FIFA pending investigations into his conduct which may be in breach of the FIFA code of ethics.

With Nyantakyi gone, government is keen on cleaning up the mess, and will heavily involve ex-players in its attempts to restore the integrity of Ghana football.

"This interim committee set up by government is dead on arrival. They have a bad image. It is a blue kiosk committee to me," Mr Arhin told Happy FM.

"Dr Kofi Amoah said in 2004 that he has little knowledge in football and hence withdrawn from the GFA presidential race giving way to the late Ben Koffie to go unopposed. I don't understand why he is part of the committee. He has no business being there."

"I don't even want to talk about Eva Okyere. Was she not part of the Disciplinary committee of the FA which always had their verdict wrong? She is a square Peck in a round hole"

"The best former player to have been on the committee is Tony Baffoe not Rev. Osei Kofi. Rev Osei Kofi has no knowledge in football now."

"How can Abedi Pele be part of this committee? Someone who was once caught in a match fixing scandal? Abedi Pele is another corrupt person and shouldn't be part at all,"  he bemoaned.

He reiterated that, "Working with these people will be a difficult task. Football people won't agree to this arrangement by the government."

"It is clear Hon. Isaac Asiamah is not on top of issues. The least said about him, the better."

"NSA officials were also captured in the Anas video. Why has government not taken steps to dissolve the NSA? Are their case different?" he quizzed.