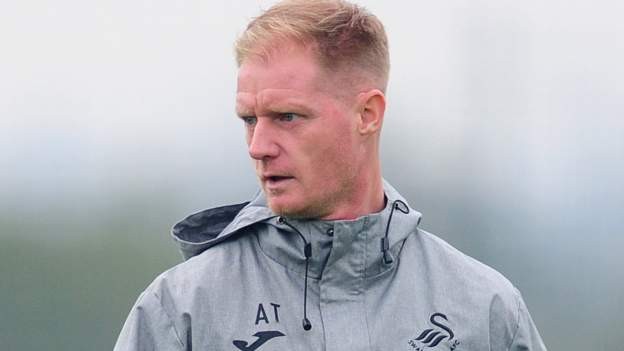 Alan Tate played for Swansea in all four divisions

Alan Tate is unsure how long he will be in charge at Swansea City as the club's search for a manager continues.

First-team coach Tate was at the helm for Wednesday's 2-1 friendly win at Forest Green after John Eustace turned down the manager's job.

"Whatever's happened with the new manager, I don't know, it's out of my hands.

"[Chief executive] Julian [Winter] is dealing with that along with the owners and I'll leave that with them.

"It's a proud moment for me leading this team out tonight - I've had loads of proud moments at this club.

"I will cherish the first one tonight, but apart from that, what's going on above me is above me. I'll continue doing what I'm doing until I'm told otherwise."

As things stand, Tate will be in charge when Swansea host Southampton in their final pre-season game on Saturday.

But the Championship club are keen to bring an end to their manager hunt, with interviews and meetings of the club's hierarchy understood to have taken place over the last few days.

Winter was in the stands at the New Lawn for the Forest Green friendly.

Tate has stated previously that he wants to be a manager - but says his situation is not important right now.

"I do feel as if I am ready to go into it, whether it's now, a few months' time or a few years' time," added the former defender. "But it's not about me, it's about what's best for the club."

Captain Matt Grimes, who is a target for Fulham, missed the Forest Green win with what the club described as a minor knock.

Swansea have also revealed that Ryan Manning, Jay Fulton and youngsters Ben Margetson and Lewis Webb are isolating after testing positive for Covid-19.

Yan Dhanda and 16-year-old academy product Ben Lloyd scored against Forest Green, who replied from the penalty spot late on after Joel Latibeaudiere was sent off for a pull.

"He is a local lad, from Bishopston. He came to the club I think when he was 12. He was deemed not good enough at Cardiff and he came back here.

"But with him, let him grow. He will be in the matchday squad on Saturday if I am still doing it, but then he will go back to the under-18s and continue his development. It's about the future for Ben, it's not about the now."