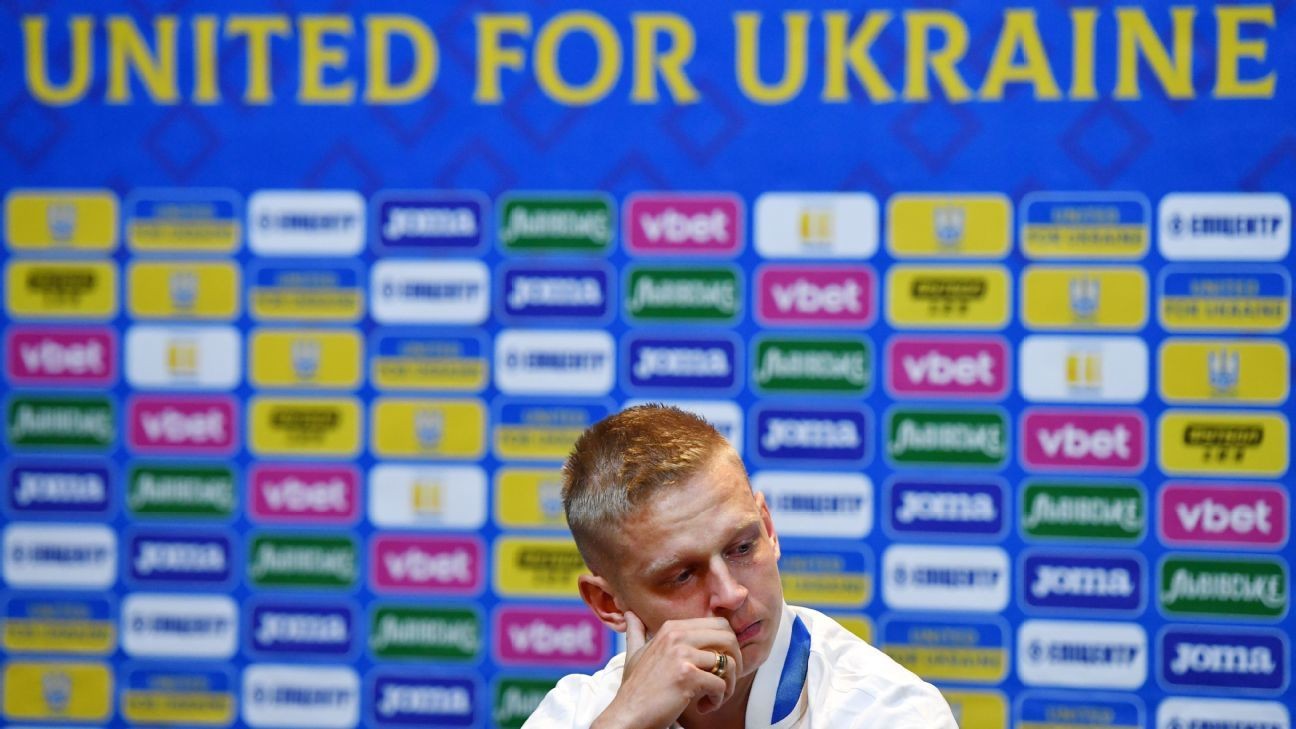 Oleksandr Zinchenko of Ukraine speaks to the media ahead of his team's match against Scotland on Wednesday. Getty Images

Ukraine midfielder Oleksandr Zinchenko broke into tears on the eve of his team's crucial World Cup qualifier with Scotland, saying he wanted above all else to see peace in his homeland.

Ukraine, ravaged by war since Russia's invasion in February, face Scotland at Hampden Park on Wednesday and if they win that game they will go on to take on Wales in Cardiff on Sunday for a place in the finals in Qatar in November.

But Zinchenko, who plays for Premier League champions Manchester City, said the prospect of World Cup qualification was secondary to the main hope of his countrymen.

"Every Ukrainian wants one thing -- to stop this war," Zinchenko said. "I spoke to people from different countries, all over the world and I spoke to some Ukrainian kids who just don't understand what's happening back in Ukraine. They only want the war to stop. They have one dream to stop the war.

"When it comes to football, the team, we have our own dream. We want to go to the World Cup, want to give these incredible emotions to the Ukrainians because they deserve it so much at this very moment."

Zinchenko has shown his emotions on and off the field since the war began and, sat in an auditorium with his coach Oleksandr Petrakov, it was clear it continues to impact on him.

"It's impossible to describe these feelings until you are not in this position. The things which are happening now in our country, it's not acceptable. It's something which I cannot even describe," he said.

"So that's why we need to stop this aggression altogether and we need to win because Ukraine is a country of freedom. Ukraine is never going to give up.

"But the thing is, which I would like to say as well that a lot of countries maybe don't understand that: Today it is Ukraine but tomorrow it can be you. So that's why we need to be united and need to defeat aggression altogether."

Zinchenko praised the welcome the team has received in Scotland and said he appreciated an attempt to provide Scotland fans with phonetic lyric sheets to sing along with the Ukrainian national anthem, calling it an "amazing initiative."

Ukraine have not played a competitive game since Russia's invasion, but have played three friendly matches against club sides and trained together in Slovenia.

The meeting with Scotland was postponed from its scheduled date in March and Zinchenko is sure that there will be huge interest at home.

"I am sure that the whole of Ukraine will be watching us. We will feel the support. We can talk a lot, but we need to prove everything on the field. We will try to make our people happy and proud," Zinchenko said.

Meanwhile, Scotland are hoping to reach their first World Cup finals in 24 years and manager Steve Clarke understands if they are to make it through the playoffs it will have to be at the expense of war-torn Ukraine.

"They made a decision to get their football players out the country and to a training camp because they want to play and want to try to give their nation a boost by qualifying for Qatar," Clarke said on Tuesday.

"The game goes ahead amid the horrific outside influence, but for us, we focus on the game of football.

"How you would deal with yourself if you were put in that situation, you don't know until you're actually there, but I've nothing but good thoughts for them and good wishes for them -- except for during the game."