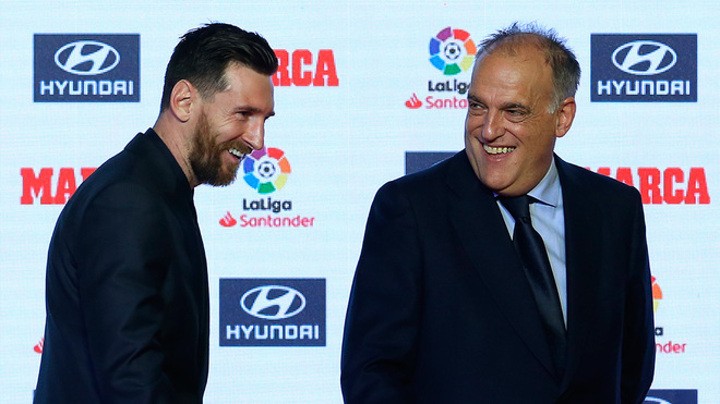 Lionel Messi has less than one year left in his contract with Barcelona and LaLiga president Javier Tebas has made clear that he wants to see the Argentine stay in Spain after his deal comes to an end.

The Barcelona captain asked to be released from the club last summer, but the Catalans refused to let him go on a free transfer, with Manchester City, Paris Saint-Germain and Inter all reportedly interested to acquire his services.

"It's true that a player is very important in one specific part of the world," Tebas said in a speech the CEU Cardenal Herrera University. "A Japanese player or a Chinese player are better positioned in those countries.

"With Wu Lei, Espanyol would be twice as [popular] in LaLiga Santander as Real Madrid or Barcelona.

"I'd prefer Messi to stay, but it's not a matter of life and death. We have closed TV agreements for four years.

"There is a fact: that we have sold our international TV rights for the next four seasons. Even if Messi leaves, we have still sold them, and we have three years to recover."

Several superstars including Neymar and Cristiano Ronaldo have left Spain to join other leagues in the last few seasons, but Tebas denied that LaLiga Santander has lost its value.

"I've heard that so many times but LaLiga Santander is not losing value," Tebas added. "I'd rather have those players here playing.

"I prefer that they go for tax reasons than for something else. We are better in terms of managing [the league] than England, but they have 77 million inhabitants, with a larger TV audience and more income per capita.

"Every weekend in England there are 14 million more households that pay to watch English football. It is impossible to reach that turnover."