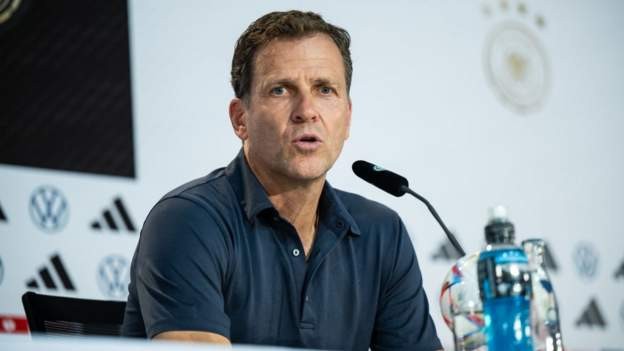 Germany technical director Oliver Bierhoff has had his contract terminated after his country's early exit at the 2022 World Cup.

Bierhoff, 54, scored both goals as Germany beat Czech Republic 2-1 in the final of Euro 96 at Wembley.

He had been with the German football association (DFB) from 2004 but left after Germany came third in Group E.

"Oliver Bierhoff has been of incredible service to the DFB," said president Bernd Neuendorf.

"Even though we have fallen short of expectations on the pitch in recent tournaments, he has been behind big moments.

"His work will forever be intertwined with our World Cup triumph in Brazil. Even in turbulent times, he always followed his goals and visions and has helped shape the DFB in a sustainable manner.

"I want to thank Oliver Bierhoff on behalf of all the staff at the DFB for everything he has done for us and football in Germany."

During his time with the DFB, Germany reached the semi-finals of six consecutive major tournaments and won the 2014 World Cup in Brazil. Additionally, Germany won the 2017 Confederations Cup and two Under-21s European titles.

Bierhoff's contract had been due to run until 2024, but Germany disappointed in Qatar as they lost 2-1 to Japan and drew 1-1 with Spain, before a 4-2 win over Costa Rica was not enough to take them through.

It was Germany's second successive elimination in the group phase of the World Cup after they suffered a shock 2-0 loss to South Korea four years ago in Russia.