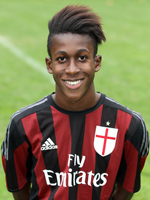 The 17-year-old has moved on a permanent deal from AC Milan.

Kyeremanteng will be training with Novara's Primavera (youth) squad before being considered for the First Team.

According to reports, he was being chased by some foreign clubs including French side Rennes and PSV Eindhoven.