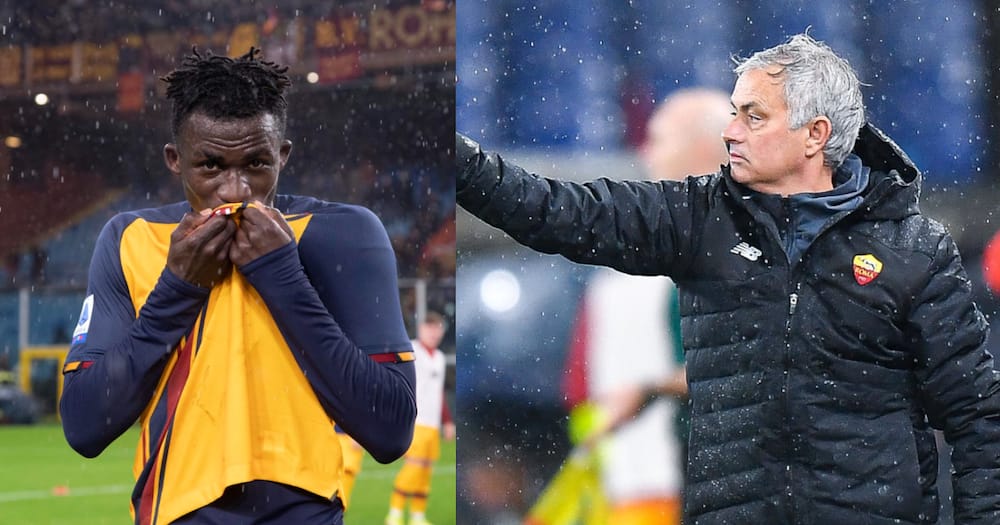 Ghanaian teen forward Felix Afena-Gyan has moved to play down an apparent racist remark in the trending video of Jose Mourinho presenting him with pair of shoes.

The Portuguese had promised the Ghanaian forward his favourite pair of shoes after his two goals secured a crucial 2-0 victory against Genoa in Serie A on Sunday night.

Mourinho fulfilled his promise by buying €800 worth of Balenciaga shoes for the 18-year-old. The presentation was filmed and shared on social media.

However, it appeared that someone not captured passed a racist remark, saying “there are bananas inside” as Afena-Gyan unpacked the box.

The remark has overshadowed the touching moment, but Afena-Gyan in a message posted on social media stated it was a joke about him eating lots of bananas.

"I have been reading a lot of comments about the video I published earlier today of a special moment for me with the coach," he said on Instagram.

"I want to assure you all that I was not offended by the background comment made in the video in any way -- and that I truly believe there was no racist intent. "Since the first day I arrived at the club I have been welcomed into the family by everyone, who have joked with me like they do all members of the family.

"Because they see that I eat bananas a lot that has become a thing we laugh about sometimes -- and I believe the comment was another example of that."

Afena-Gyan was making just his third appearance for the Roma first team and he made the most of it this time.

He came on in the 74th minute and eight minutes later, delivered a fine finish to put Roma ahead in the difficult game.

His second was absolutely stunner as he curled the ball into the far top corner from outside the box after evading a challenge.

Afena-Gyan joined the Italian club in January this year, moving straight from lower-tier of Ghana football.